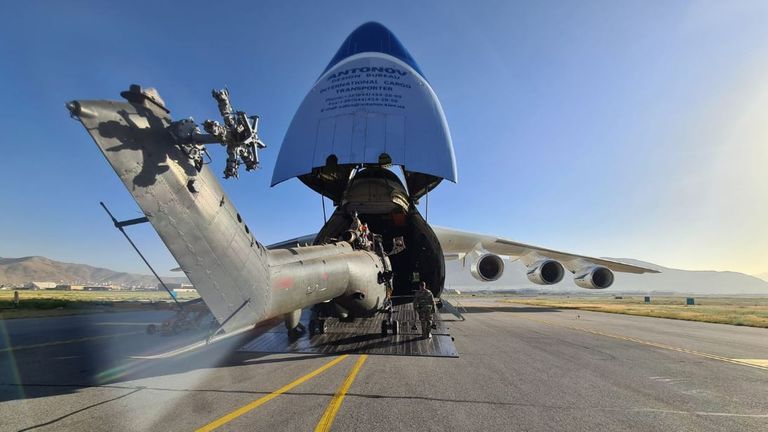 The majority of British troops have quietly withdrawn from Afghanistan, with flag-lowering ceremonies marking the final stages of a nearly 20-year campaign, Sky News understands.

Boris Johnson is set to chair a National Security Council meeting on Monday to decide the future shape of the UK footprint in the country, amid mounting security concerns as the Afghan government loses territory to a resurgent Taliban and the threat of civil war looms.

British special forces could retain a presence, while a small number of regular troops may be required if the UK decides – as is likely, according to a Whitehall source – to keep an embassy open.

The developments emerged as expectations grew that a much larger withdrawal by the US of thousands of its forces from Afghanistan could be completed within days.

The UK’s National Security Council meeting has already twice been delayed – and could be again – but time is running out to finalise and publicise the British position.

“We are getting to a crunch point,” a second Whitehall source said.

Britain has been drawing down its presence of some 750 military personnel as part of a NATO mission in Afghanistan after US President Joe Biden decided to pull his troops out by 11 September – the 20th anniversary of the al Qaeda attacks on his country that prompted the US-led invasion in the first place.

In reality, the American exit is happening at a much faster rate, though Reuters reported that around 650 US troops could remain to protect the American embassy in Kabul.

Other NATO allies are also pulling off low-key departures.

On Wednesday, Germany and Italy declared their military missions in Afghanistan over and Poland’s last troops returned home.

Details about the UK exit have been kept very quiet, with no official images released yet of any of the flag-lowering ceremonies, which are used to mark the end of any deployment by different units of troops.

At least one ceremony is understood to have taken place at Kabul’s international airport.

In the most recent evidence of the exodus, an aircraft carrying infantry soldiers landed back in the UK this week.

It was one of a number of flights that have been transporting military equipment and personnel back from Afghanistan over the past few weeks.

The Ministry of Defence (MoD) did release a statement and photographs last Friday about the return of a detachment of three Puma helicopters and 55 military personnel.

While the majority of Britain’s 750-strong mission have returned home, a number of troops still remain in the country.

A spokesperson for the MoD said the withdrawal of forces as part of the NATO mission, called Resolute Support, including the UK element, which is dubbed Operation Toral, “will be complete within a few months”.

The spokesperson added: “The UK is involved in ongoing discussions with US and international allies regarding the future of our support to Afghanistan.”

The low-key exit is in stark contrast to a previous, much larger, drawdown in 2014 – when the UK mission in Afghanistan shifted from a combat operation involving thousands of troops to one focused purely on supporting the Afghan security forces.

At that time journalists were invited to embed with British troops as they lowered flags at their sprawling base in Helmand province, in the south of the country, and as the last aircraft took off from Camp Bastion.

Back then, there had been relatively more optimism about the sustainability of the Afghan government and its security forces.