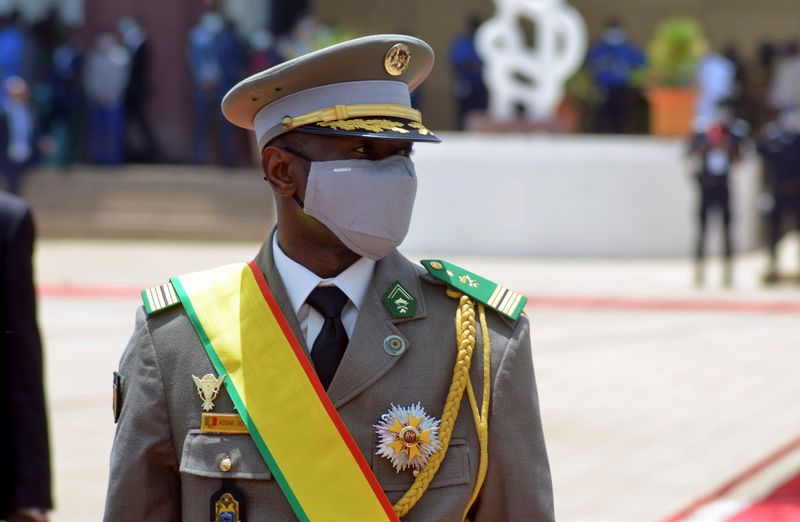 BAMAKO (Reuters) -Mali’s interim President Assimi Goita, a special forces colonel who orchestrated two coups in the last year, said he escaped unharmed after an assailant attempted to stab him during prayers at a mosque in the capital Bamako on Tuesday.

The president’s office earlier said the attacker was overpowered by security officers, and investigations into the incident were ongoing.

Mali, the theatre of French-supported operations against al-Qaeda and Islamic State-linked insurgents for a decade, was thrown into political turmoil after a military junta led by Goita toppled President Ibrahim Boubacar Keita in August 2020.

Goita served as vice-president to transitional leader Bah Ndaw until his ouster in May.

“Everything is fine, there is no problem. It’s part of being a leader,” Goita told state television hours after Tuesday’s attack, which occurred during services marking the Muslim Eid al-Adha (Feast of Sacrifice) holiday at Bamako’s Grand Mosque.

“There are always people who are unhappy. There are people who will try to destabilise,” he said.

Having changed from the military fatigues he wore at the mosque into a sky blue embroidered robe and matching hat, Goita was shown receiving well-wishers and insisted the attack was “an isolated action”.

Images posted online by Mali’s Joliba news agency showed at least two men being forcibly removed from the Grand Mosque by security forces. It was not immediately clear if the men were suspected of participating in the attack.

Prime Minister Choguel Maiga, who was sitting near Goita at the time of the attack, told state television that a man wielding a knife had approached the interim president at the end of the prayer and attempted to stab him in the neck.

“As you know the interim president is an officer of the special forces, and I believe his instinct help prevent the aggressor from reaching his objective,” Maiga said.

He added that the 38-year-old Goita and his security guards had kept their calm during the incident.

Despite initial condemnation of the May coup by western allies like France, which is seeking to end its military mission in West Africa’s Sahel region, Goita was sworn in as interim president last month.

He has vowed to oversee a transition that will lead to democratic elections.

(Additional reporting by Bate Felix and Diadie Ba in Dakar;Writing by Cooper Inveen; Editing by Catherine Evans and Joe Bavier)