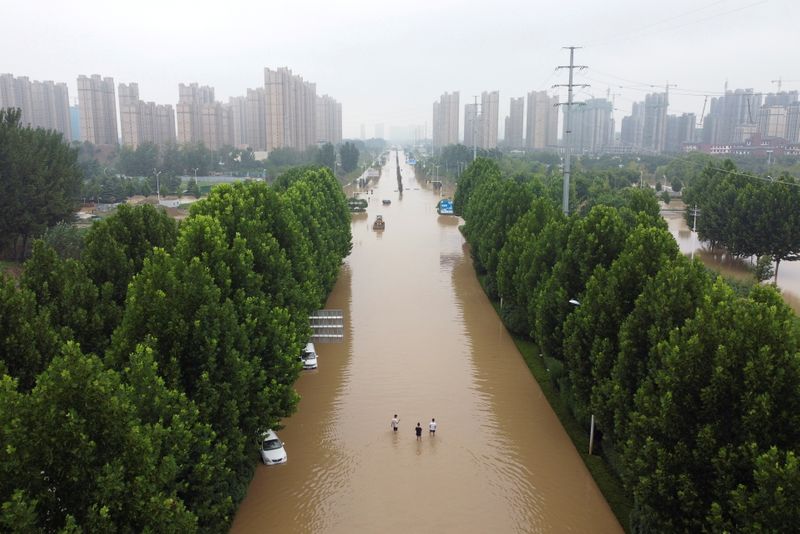 ZHENGZHOU (Reuters) – For many migrant workers caught up in severe flooding in the central Chinese city of Zhengzhou, crossing town to stay with relatives in less affected areas or returning to their homes in the countryside are not posssible.

They must stay put, tied to livelihoods in inundated parts of the city and living too far away from families to reach them when transportation is so badly disrupted.

That means surviving without power and running water for days and counting, difficulty moving around Zhengzhou and mounting worry over how they are going to get back to work.

Hu, a 40-year-old construction worker from Shandong province who gave only his surname, is one of them. He rations his food and water, and ventures out into waist-high, mud-coloured water once a day in search of cell phone reception.

“I can’t simply go back to my hometown. I work here,” he said, sitting in a park that was raised from the roads and so no longer flooded.

“Some people have … relatives nearby they can go to. For us non-locals, leaving is not easy. We have no way of going home, and we have no work at home.”

China’s estimated 280 million rural migrant workers often flock to cities like Zhengzhou in search of better jobs, leaving behind families and only returning home once a year for the Lunar New Year.

The city of 12 million is still recovering from floods this week during which it received the equivalent of a year’s worth of rain in just a few days.

The death toll in Henan province, where Zhengzhou is located, is 56 and five people are missing, according to state media.[L1N2OY040]

Zhu Lingyan, 35, is a migrant worker whose family-run business was hit by the floods.

Hailing from a city over a 100 km from Zhengzhou, she had opened a noodle restaurant just before the floods hit, investing her life savings of 200,000 yuan ($31,000) in the business.

“All the electrical appliances are ruined. It’s too hard,” she said, trying to hold back tears. She estimated it would cost up to 30,000 yuan to fix the damage. “I have to stay. My husband is working here and my children go to school here.”