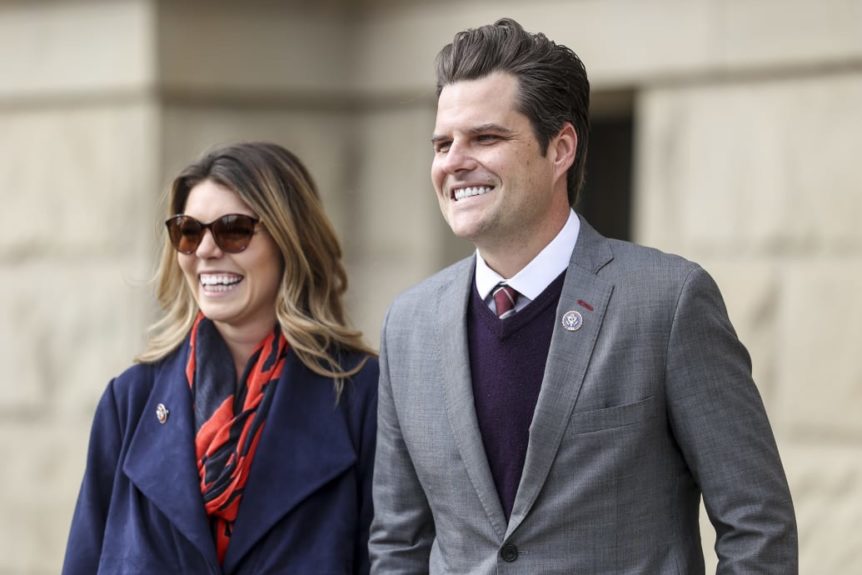 Rep. Matt Gaetz’s future sister-in-law appears to have had more than enough with the Florida congressman, posting three TikTok videos in the last two days slamming him as “weird and creepy” and “a literal pedophile.”

Roxanne Luckey—the sister of Gaetz’s fiancée, Ginger Luckey—was sharply critical of the congressman and his treatment of young women, saying she “unfortunately was not surprised” to have learned Gaetz was under federal investigation for sex crimes.

In one video Monday night, Roxanne Luckey told a story about Gaetz pressuring an older man to court her when she was 19. Roxanne Luckey called the move “weird and creepy”—and she claims Gaetz yelled at her and her mother and went “full lawyer” when she confronted him.

“I saw the character and type of person he is, and when everything came out about him, I honestly, unfortunately, was not surprised,” Luckey said in one video.

“As someone who has personally experienced a ton of creepy old politician men hitting on me when I was underage, and experiencing sexual assault at that age by people of power, it’s very disheartening and I have zero tolerance of people like [Gaetz],” said Roxanne, who in 2020 worked briefly as a White House intern. She added that she is “tired of them getting away with this type of stuff.”

After the videos were posted, Ginger Luckey hit back at her sister, telling The Daily Beast she had a history of “destructive behavior.”

Roxanne, who is 20 now, said she was sharing her experiences in part because of her interactions with powerful men and her belief that it is important to “hold people accountable to whatever extent we can.”

“There is so much more to the story and about what I know about Matt Gaetz,” she added. “It is definitely a serious situation.”

The first of the videos, posted on Sunday, features Luckey dancing and lip-synching to Lana Del Ray’s “Jealous Girl” with a New York Times headline in the background, reading “Matt Gaetz Is Said to Face Justice Dept. Inquiry Over Sex With an Underage Girl.” She added her own text, writing, “When a creepy old man tries to hit on you at the bar but your sisters engaged to a literal pedophile.”

In a follow-up video Monday night, Luckey apologized for using the term “pedophile” and shifted to “ephebophile”—someone primarily attracted to mid- to late-adolescents—which she reasoned felt more appropriate for Gaetz.

While The Daily Beast couldn’t reach Roxanne Luckey, the woman in the TikTok video appears to be the same person seen in a family photo on Ginger Luckey’s Facebook page, and the two women have multiple overlapping social media contacts. Ginger Luckey’s mother also appears to like posts on Roxanne’s Facebook. The TikTok account also shares two videos showing the person working in the White House as an intern. The Daily Beast was able to verify with a former Trump official that Roxanne Luckey did work as an intern during the summer of 2020, as the TikTok account claims.

Reached for comment Monday evening, Ginger Luckey claimed she and Roxanne had been estranged. (A video posted by Roxanne Luckey suggests she was close with her sister and Gaetz as recently as November.)

“Matt and I are enjoying our engagement and are deeply in love. My estranged sister is mentally unwell,” Ginger Luckey said in a text message. “She has been in therapy for years and our family hopes that after receiving in-patient mental health treatment, she will overcome the tendency she has repeatedly shown to engage in destructive behavior.”

Roxanne Luckey did not respond to The Daily Beast’s request for comment. A Gaetz spokesperson said the congressman supports his fiancée and her statement.

Roxanne Luckey, who in one video came out as a victim of sexual assault by “people of power,” recounted an episode last summer when Gaetz, shortly after he began dating her sister, tried to set Roxanne Luckey up with a friend of his. She said she was a 19-year-old intern at the Trump White House at the time, when Gaetz tried to connect her with a peer of his, who was divorced with a child.

According to Luckey’s account, the older man was “creepy” and repeatedly made her feel uncomfortable, even after she rejected his advances and told him she had a boyfriend. She noted that when the man later apologized, he passed the blame for his aggressive overtures onto Gaetz.

“Sorry about what I said, I just wanted to get Matt off my back,” Luckey claimed the unnamed man said.

Luckey said when she confronted Gaetz about the incident at a family gathering that Thanksgiving, the 39-year-old attorney and third-term congressman tried to gaslight her.

“He just immediately got so defensive and started yelling at me and my mom,” Roxanne Luckey said. “He called me a narcissist, just was a thousand percent gaslighting me—went full lawyer, ‘I don’t have to listen to you, I don’t have to answer your questions.’”

She said Gaetz’s anger and quick temper over the matter led her to believe that he knew he bore responsibility. “Someone who is innocent shouldn’t be getting so defensive, and literally being a grown man and yelling at a 20-year-old girl is just beyond me,” she said.

Luckey posted a TIkTok video at the time about the encounter, captioned, “It’s the sisters congressman boyfriend calling me a narcissist for calling him out for me 🤷🏼‍♀️🤪”

Luckey emphasized that the experiences informing her opinion “wasn’t just this encounter with Matt.” When she was interning in D.C. at the White House, she said she heard “through the grapevine” that Gaetz “had a reputation of prowling after college girls when he’s a grown man, and to me that’s just kind of weird.”

She did add the caveat to this claim that, “Everything is hearsay.”

“There’s two sides to every story and I acknowledge that,” she said. “But this is what I experienced.”

“He’s a narcissist and a master manipulator. She believes everything he tells her.”

Luckey seems to have sided quickly against Gaetz. After news of the investigation broke, she liked numerous tweets blasting him as a “pervert”—even as her older sister joined him for an event at Trump National Doral where he called himself a “champion of women.” She also posted a mash-up TikTok video in early April of young women, possibly friends, alleging the congressman was guilty and should be thrown out of Congress. She added the hashtags “#mattgaetzhumantrafficking” and “#mattgaetzisatool.”

Gaetz and Ginger Luckey got engaged on New Year’s Eve at Mar-a-Lago after dating for less than a year. Ginger and Roxanne are sisters of tech entrepreneur Palmer Luckey, who in 2014 sold his virtual reality company Oculus Rift to Facebook for $2.3 billion. The couple tried to buy a $155,000 yacht in Florida in late May, but the owner pulled the sale, citing as his reason the fact that they painted over the boat’s name before the deal closed, without his permission.

On Monday, Roxanne Luckey replied to a TikTok user who posted a comment to one of the videos imploring her to “get your sister out” of the relationship.

“He’s a narcissist and a master manipulator,” Luckey replied. “She believes everything he tells her.”

Meanwhile, prosecutors have been interviewing a number of Gaetz associates in the wake of his former “wingman” Joel Greenberg’s May 14 guilty plea. Last week, Politico reported that a defense attorney representing a person in the case had seen evidence that Gaetz had sex with an underage girl.

—with additional reporting from William Bredderman