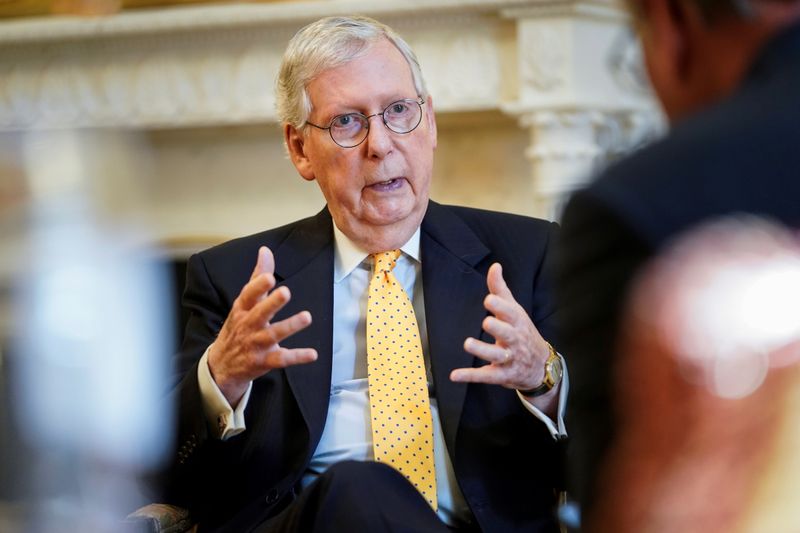 “There is bad advice out there, you know. Apparently you see that all over the place: people practicing medicine without a license, giving bad advice. And that bad advice should be ignored,” the 79-year-old Kentucky lawmaker told Reuters.

A rise in cases driven by the highly contagious Delta variant led U.S. health officials on Tuesday to urge fully vaccinated Americans to resume wearing masks in indoor public spaces in much of the country, including much of the southeastern United States from Texas to Florida.

“Not enough people are vaccinated,” said McConnell, a polio survivor. “So we’re trying to get them to reconsider and get back on the path to get us to some level of herd immunity.”

McConnell, who was vaccinated for COVID-19 in December and has been promoting vaccinations in public remarks ever since, plans to run 60-second radio ads on more than 100 Kentucky radio stations in the coming days promoting the vaccine with money from his re-election campaign.

Many congressional Republicans have refused to say publicly whether they have been vaccinated, and some have attacked the shots as unnecessary or dangerous. This continues a pattern that began early in the pandemic when conservatives protested social-distancing restrictions meant to slow the virus’ spread.

The federal, state and local governments had been counting on rising levels of vaccination to allow them to safely lift those restrictions.

A few prominent Republicans, including Alabama Governor Kay Ivey, have begun speaking out against false claims and conspiracy theories promoted in conservative media that are leading some Americans to reject vaccines.

Ivey last week told reporters it is “time to start blaming the unvaccinated folks” for rising cases of COVID-19 and criticizing people spreading misinformation about the vaccines.

She said in a Washington Post opinion piece this week that those “pushing fake news and conspiracy theories about this vaccine are reckless and causing great harm,” adding that many of the unvaccinated are “being lied to.”

“I was encouraged by what the governor of Alabama said,” McConnell noted.

U.S. vaccination rates rose quickly after vaccines became available in December but have since fallen off, especially among conservatives, young adults, Black people and Hispanics, according to the Centers for Disease Control and Prevention.

Fifty-seven percent of Americans have had at least one dose, according to the Reuters COVID-19 Vaccination Tracker https://graphics.reuters.com/world-coronavirus-tracker-and-maps/vaccination-rollout-and-access. McConnell’s home state of Kentucky lags the national average at 51%, and Ivey’s Alabama is farther behind at 42%. Four of the five states with the lowest vaccination rates have Republican governors.

About 40% of Republicans are uncertain about the vaccine or are unwilling to be vaccinated, polling data published by the Morning Consult showed. That is more than double the 16% of Democrats who voiced those concerns.

Frank Luntz is a veteran Republican pollster advising the administration of President Joe Biden about reaching people reluctant to get the vaccine. He has been warning for months about the impediment to COVID-19 vaccination rates posed by politicization.

“The key here is to ensure that no one feels like they have to do it. They have to want to do it. So, insulting them or mandating them won’t work,” Luntz told Reuters. “Political messages won’t work, unless you’re Donald Trump. If Trump were to say to them: ‘Hey, get the vaccine.’ That would make a difference. But he doesn’t do that. All he does is complain about the election.”

While McConnell has maintained a consistent message on vaccinations since he and Democratic House Speaker Nancy Pelosi were vaccinated in December, other members of his party have sent mixed messages.

When congressional Republicans have spoken up about the dangers of the COVID-19 Delta variant, they have often mixed health messages with political attacks or advocated positions that could reinforce reluctance to get vaccinated.

“I don’t take a position of either encouraging or discouraging (vaccination),” said Republican Senator Ron Johnson, who has called attention to statistics on vaccine safety that many experts dismiss as misleading.

Members of the House Republican Doctors Caucus also claimed at a news conference last week that natural immunity is an acceptable defense against the Delta variant, a message at odds with guidance from public health officials.

Three days later, Republican U.S. Representative Clay Higgins of Louisiana said he had contracted COVID-19 for a second time, after an initial infection in January 2020.