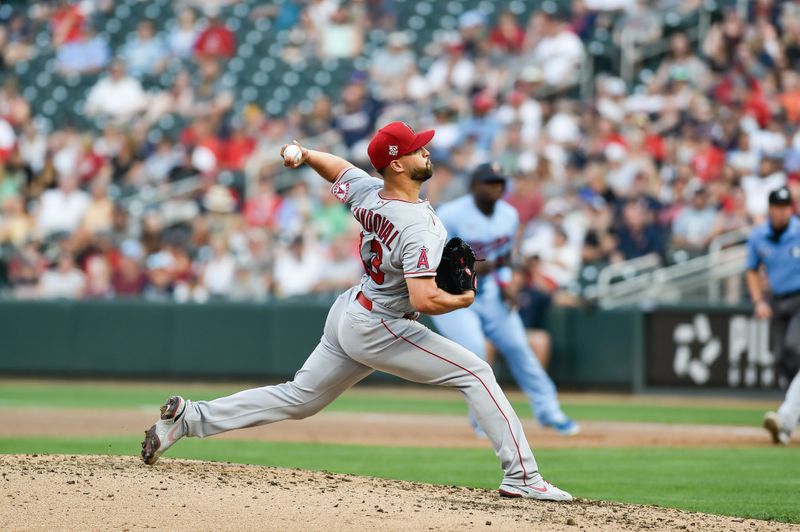 Patrick Sandoval pitched 8 1/3 no-hit innings and Shohei Ohtani had two doubles and scored a run to lead the Los Angeles Angels to a 2-1 victory over the Minnesota Twins on Saturday night in Minneapolis.

Sandoval, who entered the contest with a 3-13 career mark, kept the Twins off-balance with a changeup while registering a career-high 13 strikeouts. Brent Rooker lined a first-pitch slider down the right field line to break up the no-hitter in the ninth and then came around to score one out later when Josh Donaldson lined a double to left off reliever Raisel Iglesias.

Iglesias then struck out Miguel Sano for his 21st save. Sandoval (3-4) allowed just the one hit and a walk to Donaldson in the second inning over 8 2/3 innings. He also hit two batters.

Daulton Varsho continued his assault on his father’s former team with a tiebreaking single as visiting Arizona scored three times in the seventh inning to beat Chicago.

The game was delayed 99 minutes in the middle of the ninth inning by lightning and heavy rain. Anthony Rizzo scored the Cubs’ final run on a wild pitch following the restart.

Varsho, the son of ex-Cubs outfielder Gary Varsho, homered at Wrigley Field for the second consecutive day and ran his string to three consecutive games with a long ball. Diamondbacks right-hander Merrill Kelly (7-7) ran his unbeaten string to seven starts with six effective innings, allowing Arizona to draw even in the three-game series after taking an 8-3 loss 24 hours earlier.

Torres’ bloop single to right field against Red Sox reliever Adam Ottavino (2-3) scored Rougned Odor from second base for the go-ahead run. Odor hit a two-run double in the previous at-bat to tie the game at 3.

Brett Gardner went 2-for-4 and opened the Yankees’ scoring in the eighth with a two-out RBI single off Boston starter Nathan Eovaldi, who allowed two runs on seven hits with eight strikeouts over 7 2/3 innings against his former team.

With the score tied at 4-all, Haniger was at the plate with the bases loaded and two outs in the bottom of the ninth inning when A’s right-hander Lou Trivino (3-4) threw a wild pitch to let Jarred Kelenic come home with the winning run.

Right-hander Kendall Graveman (3-0) pitched the top of the ninth to earn the victory. Six Mariners combined for 6 1/3 innings of one-hit relief, giving up just one run, after rookie Logan Gilbert left early with a soaring pitch count.

Newman collected four hits while Ben Gamel contributed a double and two singles for the Pirates. Pittsburgh produced a season-best 16-hit attack while earning a second straight win to open the three-game series.

Gausman (9-4), who began the day with the NL’s best ERA, gave up six runs on eight hits in 4 1/3 innings. He walked four and struck out two.

Trey Mancini and Ryan Mountcastle homered for Baltimore, which goes for the series sweep on Sunday. Harvey (5-10), who came out of the All-Star break 3-10 with a 7.77 ERA, allowed one hit in winning his second straight start and lowered his ERA to 6.65. He struck out four batters without a walk.

Austin Meadows belted a pair of two-run homers and Ji-Man Choi also went deep to highlight his second four-hit performance of the season as visiting Tampa Bay posted a victory over Cleveland.

Joey Wendle also had four hits for the second time this season for the Rays, who have won 11 straight games against Cleveland dating back to the 2019 campaign. Tampa Bay has won 13 of its last 16 games to move into a tie atop the American League East with the Boston Red Sox.

The Indians mustered just five hits en route to losing for the 15th time in 21 games. DeMarlo Hale managed the team in place of Terry Francona, who returned home because of a lingering head cold.

Rowdy Tellez went 3-for-4 with two homers and three RBIs as Milwaukee topped visiting Chicago. Kolten Wong and Tyrone Taylor also homered for the Brewers, who recorded the 4,000th win in franchise history.

Corbin Burnes (6-4) allowed one run on four hits over six innings in the matchup between two division leaders. He struck out six with two walks.

Wong hit a leadoff homer on the first offering of the game from Carlos Rodon (8-4), who lasted just four innings in his shortest outing of the season.

The Padres, who had their three-game win streak snapped, got solo homers from Fernando Tatis Jr. and rookie pitcher Ryan Weathers. Tatis leads the National League with 30 homers.

Aguilar, who tops the NL with 71 RBIs, powered Miami to its third win in 10 post-All-Star-break games. Garrett (1-1) allowed four hits, one walk and two runs in seven innings for his second big-league win.

The Reds committed three errors but got a pair of sensational plays from center fielder Shogo Akiyama and third baseman Eugenio Suarez to capture their sixth straight game against the Cardinals, their longest such streak since 2003.

Castillo (4-10) got the win after four consecutive no-decisions. He allowed four hits while striking out nine and walking three. Heath Hembree pitched the ninth for his eighth save and second in as many games.

Valdez walked six batters for the second time in three starts yet pitched effectively enough to send Texas to its 11th consecutive loss. Alvarez provided insurance with his 18th homer, a solo shot off reliever Josh Sborz as the Astros improved to 8-0 at home against Texas this season.

The Rangers, no-hit by the Yankees’ Corey Kluber and the Padres’ Joe Musgrove earlier this season, broke up the Astros’ combined no-hit bid when Isiah Kiner-Falefa dropped a leadoff single into shallow right field off Houston reliever Ryne Stanek leading off the eighth.

Carlos Santana and Salvador Perez hit three-run homers to help Kansas City rally from a six-run deficit to beat visiting Detroit. Nicky Lopez had three hits and scored two runs in the No. 9 spot for the Royals, who have won four in a row.

Kansas City’s Tyler Zuber, Domingo Tapia, Jake Brentz (3-2) and Josh Staumont each threw shutout innings in relief. Greg Holland struggled in the ninth before Wade Davis got the final out with two aboard for his second save.

Jeimer Candelario hit a three-run homer and Akil Baddoo had a two-run shot for the Tigers, who have dropped two straight after winning the first seven coming out of the All-Star break.

The Blue Jays snapped a three-game losing streak. The Mets fell to 4-4 in the second half. Each of the top six batters in the Blue Jays’ order had at least two hits. The sextet combined to go 13-for-29.

Dodgers closer Kenley Jansen recorded the final three outs for his 22nd save after blowing his previous three save opportunities. That three-appearance downturn started with a blown save on July 18 at Colorado.

Los Angeles right-hander Tony Gonsolin (2-1) went 5 1/3 scoreless innings to match his longest outing of the season as the Dodgers won after dropping five of their previous six games.