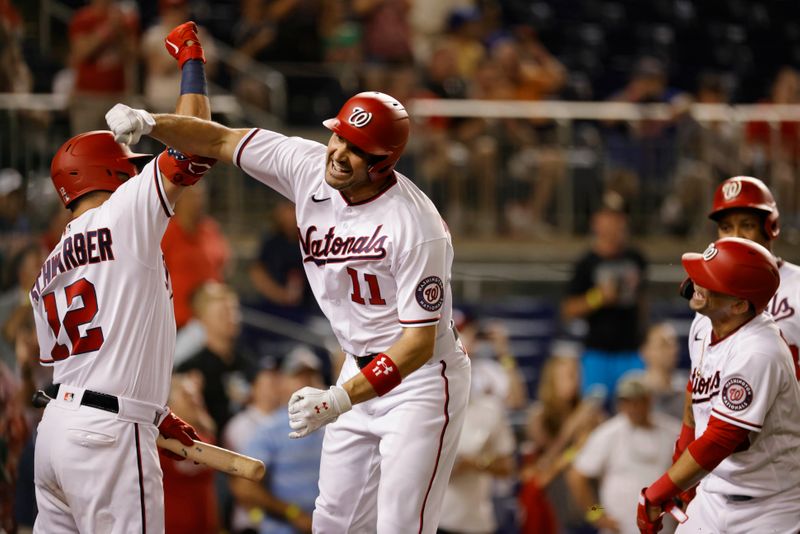 Kyle Schwarber continued his power surge by belting two of Washington’s five home runs as the Nationals earned an 8-4 victory over the visiting New York Mets on Monday night.

The sizzling Schwarber has hit 11 homers over the past nine games and 24 on the season, including seven in his past three games against the Mets. The only other player since 1901 to hit 11 home runs in a nine-game span was Frank Howard of the 1968 Washington Senators.

Trea Turner and Gerardo Parra clubbed solo shots and Ryan Zimmerman broke open a 5-4 game with a three-run blast in the eighth for the Nationals, who have won 12 of the past 15.

Mookie Betts and Max Muncy hit home runs as the first two Los Angeles batters of the game and the host Dodgers held on for a victory over San Francisco.

Will Smith added a home run for Los Angeles, while Trevor Bauer (8-5) gave up two runs on eight hits over six innings with one walk and eight strikeouts. The Dodgers extended their winning streak to four games.

LaMonte Wade Jr. and Brandon Crawford hit home runs for the Giants, and Wilmer Flores had four hits as San Francisco lost consecutive games for the first time since a May 21-23 sweep by the Dodgers. The Giants went 0-for-13 with runners in scoring position.

Shohei Ohtani homered two batters in and visiting Los Angeles beat slumping New York. Ohtani made his first hit in the Bronx an impressive one, sending a full-count curveball from Michael King (0-4) 416 feet into the right-center field bleachers for a 1-0 lead.

It was Ohtani’s 26th homer, giving the two-way star a share of the major league lead with Toronto Blue Jays slugger Vladimir Guerrero Jr. It also was his 11th homer this month, two shy of matching the team record for June held by Tim Salmon (1996) and Albert Pujols (2015).

Angels right-hander Dylan Bundy allowed two runs on four hits in 1 2/3 innings before leaving the game due to heat exhaustion from pitching in 91-degree heat. Bundy was replaced by Jose Suarez (3-1), who allowed one run on two hits in 5 1/3 innings. Steve Cishek worked a scoreless eighth and Raisel Iglesias whiffed the side in the ninth for his 14th save.

Avisail Garcia, Willy Adames and Keston Hiura homered for the Brewers, who improved to 7-3 against Chicago this season and out-hit the Cubs 15-5. Devin Williams (5-1) earned the victory, working around one hit and two walks to pitch a scoreless eighth.

The Cubs have lost four straight and 10 of 14. Ian Happ drilled a two-run home run two batters into the game, but Chicago couldn’t hold the lead. Reliever Ryan Tepera (0-2) absorbed the loss after allowing four runs on two hits in two-thirds of an inning.

Baltimore improved to 2-22 over its past 24 road games and 2-11 at Minute Maid Park since the start of the 2016 season. The Astros have dropped three of their past four overall following an 11-game winning streak.

Mountcastle, who finished 2-for-3 with two walks and three RBIs, leads American League rookies with 32 hits, nine homers and 24 RBIs in June. Paul Fry (3-3) got the win despite allowing three runs in 1 1/3 innings. Adam Plutko recorded the final two outs for his first save of the season.

Nick Castellanos continued his MVP-caliber first half of 2021 with a go-ahead grand slam and a career-high seven RBIs as host Cincinnati rallied late to beat Philadelphia.

It was the sixth career slam for the red-hot Castellanos, who has 50 RBIs and leads the National League with a .347 average. He went 3-for-5 in the makeup game for a rainout on June 2.

Castellanos’ slam — his 15th homer of the season — came with two out in the seventh inning off Phillies reliever Neftali Feliz (0-1) and wiped out a 4-2 deficit. Heath Hembree (2-3) pitched a scoreless seventh in relief of starter Wade Miley.

Hunter Renfroe hit a pair of home runs, including a go-ahead solo shot in the sixth inning, and had three RBIs to help host Boston beat Kansas City.

It was the 13th career multi-homer game of Renfroe’s career. Enrique Hernandez and Bobby Dalbec each launched solo homers for Boston, which has won four straight and five of its past seven games.

Dylan Carlson, Yadier Molina and Paul DeJong drove in two runs each as St. Louis defeated visiting Arizona. Molina knocked in his runs with his 395th career double, which moved him past Jason Kendall for fifth on the all-time list for primary catchers.

The Cardinals won for just the eighth time in 27 games while the Diamondbacks lost for the 22nd time in 24 games.

Giovanny Gallegos (5-1) earned the victory with one scoreless inning. Alex Young (2-6) took the loss in relief, giving up six runs in three innings.

Elias Diaz homered and Yonathan Daza had an RBI triple among his two hits as Colorado posted a victory over Pittsburgh in Denver.

Rockies starter Kyle Freeland (1-2) recorded his first win of the season despite leaving the game with a left leg injury sustained while running the bases in the fifth inning. Freeland scattered three hits and struck out seven over five scoreless innings.

Jacob Stallings and Kevin Newman each had two hits for the Pirates. Pittsburgh had won three of the first four contests on its current seven-game road trip. First baseman Colin Moran was hit on the left wrist by a pitch in the top of the first. He went out for warmups in the bottom of the inning but came out of the game.