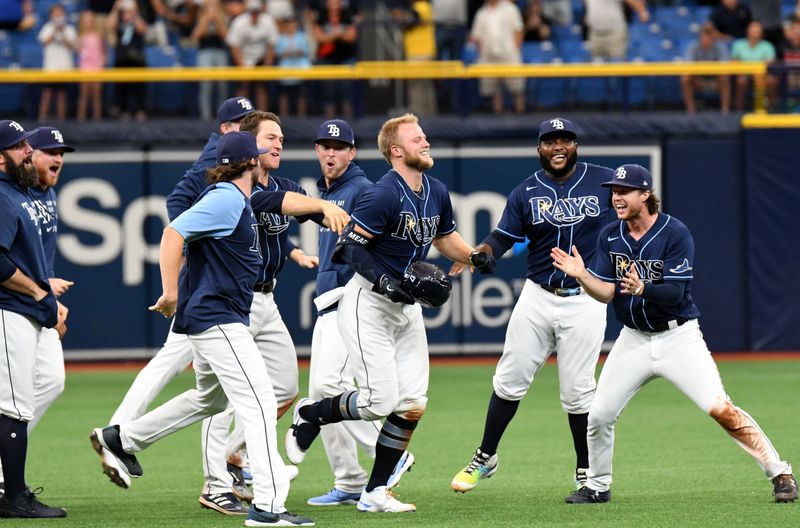 Austin Meadows delivered a two-run, two-out walk-off single in the ninth inning as the Tampa Bay Rays rallied to beat the Baltimore Orioles 5-4 on Wednesday in St. Petersburg, Fla.

With the Rays down 4-3 in the ninth, Mike Zunino walked and Randy Arozarena — who homered twice in the contest — blooped a ball that fell into right field following a collision between Baltimore’s Pat Valaika and Ryan Mountcastle.

Baltimore’s Tanner Scott (3-4) then struck out Vidal Brujan, but with two strikes, Meadows drilled his second hit of the day to right-center field, giving Tampa Bay a second consecutive win and a series victory.

Mountcastle homered and broke a 3-3 tie with his RBI single in the sixth for the Orioles, who are 1-8 against the Rays this season.

Stroman (7-8) threw just 90 pitches while striking out seven and walking one. Jeurys Familia finished the game by striking out the side in the ninth.

Jonathan Villar and Luis Guillorme also homered for the Mets, who homered 11 times in the three-game set and scored all seven runs via the long ball in the series finale.

The Pirates tied the score at 4 with a bases-loaded walk in the top of the seventh, but Smith and Varsho hit their homers to right field to begin the bottom of the inning against Duane Underwood Jr. (2-3). Arizona protected the lead, and Joakim Soria pitched a perfect ninth for his sixth save, all coming this month.

Nick Ahmed led the Diamondbacks’ 12-hit attack by going 3-for-4 with an RBI. Bryan Reynolds went 3-for-4 for the Pirates, who had 11 hits and left Arizona with a four-game losing streak.

Paddack (6-6) allowed three hits and struck out one to become the first San Diego starter to throw five scoreless innings since June 22.

Tatis, who was 2-for-3, hit a long two-run homer into the left field bleachers off reliever Shane Greene in the fifth inning.

Brad Keller pitched effectively into the seventh inning for his first victory since early June and visiting Kansas City capitalized on two Milwaukee errors en route to a victory.

The Royals erased a 3-2 deficit in the sixth against reliever Brent Suter (9-5). Carlos Santana singled and took second with one out when Andrew Benintendi reached on an error by first baseman Jace Peterson.

Hunter Dozier tied it 3-3 with an RBI single to center. Ryan McBroom’s pinch-hit infield single loaded the bases and Nicky Lopez followed with a two-run double into the right field corner.

Austin Gomber won in his return from the injured list, Dom Nunez had a three-run double and Colorado scored five runs in the first inning while beating Seattle in Denver.

Gomber (7-5) had missed a month with left forearm tightness. He allowed three runs on three hits — all home runs — and struck out three in six innings in 71 pitches on Wednesday.

Mitch Haniger, Kyle Seager and Luis Torrens hit home runs for the Mariners. Darren McCaughan pitched five innings of relief in his major league debut, giving up one run, walking three but not allowing a hit.