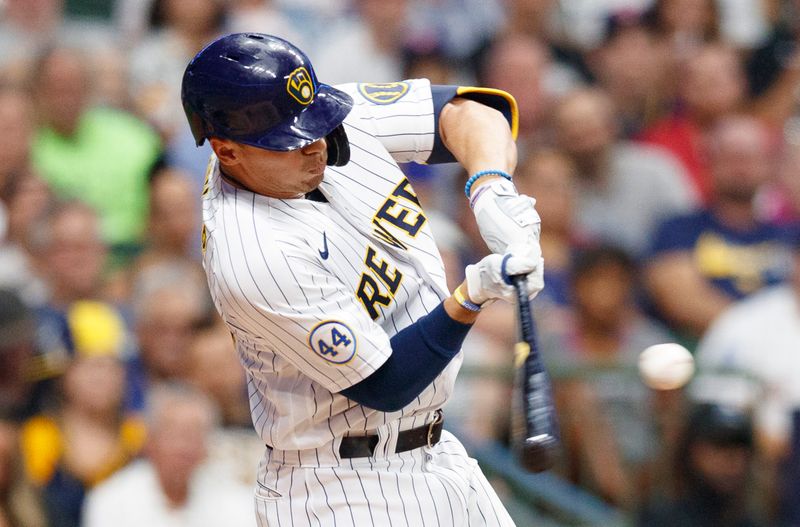 Tyrone Taylor hit his first career grand slam during Milwaukee’s six-run seventh inning, and the Brewers opened a three-game series against the visiting Chicago White Sox with a 7-1 victory on Friday night.

Andrew Vaughn had three hits, including a home run off Hunter Strickland in the eighth inning for Chicago’s lone run. The White Sox were held to five hits in the matchup between division leaders.

With Milwaukee managing Freddy Peralta’s innings, the right-hander exited as planned after allowing one hit over four innings. He struck out five while throwing 51 pitches. Adrian Houser (6-5) followed Peralta and earned the victory with two scoreless innings.

Trevor Story had a go-ahead RBI single in the 10th inning and Charlie Blackmon added a two-run home run one batter later as visiting Colorado rallied for a victory over Los Angeles.

Colorado trailed 5-3 in the eighth inning before tying the score on a Blackmon RBI double and an RBI single from Ryan McMahon. The Rockies went ahead 6-5 in the ninth inning on a home run by Sam Hilliard.

The Dodgers tied the score at 6 in the ninth inning on a bases-loaded walk to Justin Turner with nobody out. But Colorado’s Daniel Bard rebounded with three consecutive strikeouts to send the game into extra innings.

Pittsburgh scored three seventh-inning runs without the benefit of a hit to break a tie en route to victory over host San Francisco in the opener of a three-game series.

After the Giants had used home runs by Steven Duggar and Alex Dickerson to erase a 3-0 deficit, the Pirates pieced together three walks, two infield grounders and a Giants error for the go-ahead rally in the seventh to snap a four-game losing streak.

Bryan Reynolds had two hits and a homer for the Pirates, while Thairo Estrada and Buster Posey collected a pair apiece for the Giants. San Francisco out-hit the visitors 8-4.

Luis Torrens also went deep for the Mariners, who evened the four-game series at a victory apiece.

Matt Chapman and Matt Olson homered for the A’s, who struck out 18 times and had a three-game winning streak snapped.

Rafael Devers hit a pair of home runs, including a tiebreaking two-run blast in the fifth inning, as Boston beat visiting New York in the second game of a four-game series.

Devers (2-for-4) added a three-run shot in the seventh for his 100th career home run and his team-leading 26th of the season to cap his five-RBI night. Xander Bogaerts also drove in a run for Boston, which earned its fourth straight win.

The Red Sox took the first two games of the series after a wild, come-from-behind, 5-4 win in 10 innings on Thursday. Boston improved to 9-2 against New York this season.

Bryce Harper doubled, singled, walked and stole three bases for the first time in his career. He became the first Phillie to steal second, third and home in the same game since Jayson Werth on May 12, 2009. Phillies starter Zack Wheeler (8-5) allowed seven hits and one run with eight strikeouts in seven innings.

Wendle, a former Indians farmhand, plated Randy Arozarena with an RBI single to left-center field to give Tampa Bay a 5-4 lead in the ninth inning. Ji-Man Choi hit a three-run homer to right field before Nelson Cruz scored on a groundout and Wander Franco added an RBI single to cap a three-hit performance.

Cruz, acquired by the Rays in a four-player trade with the Minnesota Twins on Thursday, homered for his 20th of the season. Cleveland’s Jose Ramirez hit a three-run homer and RBI triple. Daniel Johnson added a solo shot in the ninth inning for the Indians.

Farmer and Joey Votto had three hits for the Reds, who won for just the second time in seven tries in their nine-game homestand coming out of the All-Star break.

The Cardinals fell for just the third time in eight games since the break. Paul Goldschmidt and Harrison Bader went deep in the loss.

Josh Bell homered and Gerardo Parra had two of Washington’s five hits. The Nationals went 0-for-8 with runners in scoring position.

Mark Melancon pitched a scoreless ninth for his third save in three days. He has 30 saves on the season, which leads the majors. Tommy Pham hit his 11th homer as San Diego won its third straight game.

Miami, which has lost seven of nine games to start the second half, was led by Adam Duvall, who hit a 421-foot solo home run. It was Duvall’s team-high 22nd homer.

Nick Gordon had two hits and scored the winning run in the eighth inning on a throwing error as Minnesota rallied from a four-run deficit to edge Los Angeles in Minneapolis.

Jorge Polanco went 3-for-4 with a double and a run scored, Ryan Jeffers had two doubles among three hits, and Josh Donaldson also had two hits for Minnesota. Juan Minaya (1-0) picked up the win with an inning of scoreless relief and Taylor Rogers garnered his ninth save.

Kurt Suzuki and Jack Mayfield each homered and Phil Gosselin went 2-for-3 with a double and a run scored for Los Angeles. Raisel Iglesias (6-4) suffered the loss. Slumping Shohei Ohtani didn’t play for the Angels.

Baez also doubled and Chirinos had three hits for Chicago, which earned a needed win after dropping four of its previous five games. Zach Davies (6-6) struck out a season-high eight while pitching into the sixth inning.

Daulton Varsho had a two-run double in the sixth inning and a solo homer in the ninth for the Diamondbacks, who had won four in a row. Zac Gallen (1-5) matched a career high by allowing seven runs on six hits in four innings for Arizona, which lost for the 31st time in its past 33 road contests.

Alonso hit a two-run homer off former teammate Steven Matz (8-5) in the first and added a 450-foot solo homer in the eighth as the Mets won for the fourth time in five games. It was the Home Run Derby champion’s ninth career multi-homer game and second this season.

In his sixth career start, Megill (1-0) allowed a hit to Cavan Biggio with two outs in the second and a two-out single to Alejandro Kirk in the fifth. He struck out five, walked one and threw 78 pitches, including just four in the sixth.

Robel Garcia produced three of the Astros’ eight hits and scored a run. Houston reliever Brandon Bielak (3-3) got out of a jam in the fifth inning and allowed one hit and recorded one strikeout over 2 1/3 scoreless innings.

Kolby Allard (2-8) allowed seven runs on seven hits and one walk with five strikeouts over four innings and fell to 1-8 as a starter while suffering a sixth consecutive loss. Texas last dropped 10 consecutive games during the 1995 season.

Bubic (3-4) allowed one run on six hits in six innings, walking two and striking out four. He also induced three ground-ball double plays. Bubic has struggled as a starter in 2021. He owns a 2.96 ERA in eight relief appearances this season, opposed to a 6.34 ERA in his eight starts before Friday’s game.