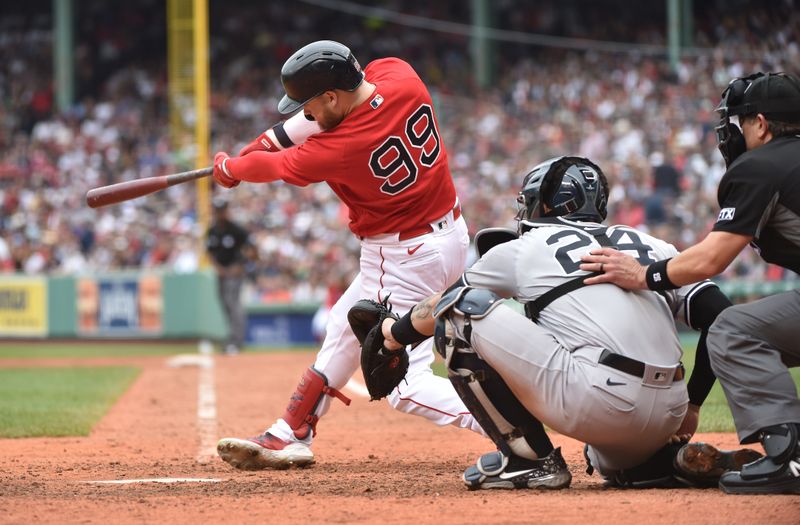 Alex Verdugo broke up a no-hit bid from Domingo German in the eighth inning, opening the door to five runs as the Boston Red Sox rallied past the visiting New York Yankees for a 5-4 win in the finale of a four-game series on Sunday afternoon.

German tossed seven no-hit innings with 10 strikeouts before giving up a leadoff double to Verdugo. Hunter Renfroe and Kike Hernandez each had RBI doubles in the inning, and Christian Vazquez and Kevin Plawecki drove in one run apiece before Xander Bogaerts hit a sacrifice fly to cap the five-run rally.

Jonathan Loaisiga (7-4) allowed four of Boston’s five runs while failing to record an out in the eighth. German allowed just one run on one hit with a walk in seven-plus innings.

Brandon Workman (1-2) earned the win after allowing a run on two hits in the eighth, while Matt Barnes pitched a scoreless ninth for his 21st save. Boston improved to 10-3 against New York this season after winning three of four in the series.

Ryan McKenna slid home safely on a fielder’s choice grounder by Ramon Urias to cap a two-run ninth inning, and Baltimore rallied past visiting Washington to complete a three-game sweep.

The Orioles scored their decisive two runs on just one hit in the ninth, with the tying RBI on a bases-loaded sacrifice fly by Pat Valaika and the grounder by Urias scored the winner.

Ryan Zimmerman drove in all four runs for Washington (including a three-run home run), which finished a six-game stretch against the last-place Marlins and Orioles with a 2-4 mark.

Nola (7-6) allowed four hits, struck out nine and walked none. He threw 116 pitches, 78 for strikes. Nola had allowed 15 earned runs in his three previous outings. Ranger Suarez recorded the final out for his fourth save.

Austin Riley homered and doubled twice for the Braves, who managed only four hits.

Lance Lynn tossed six strong innings and helped his own cause with two RBIs as visiting Chicago salvaged the finale of a three-game series against Milwaukee.

Lynn (10-3) allowed one run on six hits while throwing 98 pitches. The major league ERA leader struck out six with no walks to help Chicago snap a three-game losing streak. Michael Kopech tossed a scoreless inning before Liam Hendriks recorded the final six outs for his 24th save.

Fellow outfielders Ryan Carlson and Tyler O’Neill added long home runs, and Nolan Arenado also homered for the Cardinals, who ended a six-game losing streak to the Reds and showed signs of life after their manager Mike Shildt was ejected in the third inning.

Sonny Gray (2-6) suffered through his worst outing in a Reds uniform, allowing three homers and eight hits over just 3 1/3 innings, getting tagged for eight earned runs, including six in the fourth inning. The Reds finished a disappointing post-All-Star break homestand with a 3-6 mark.

Salvador Perez clubbed a three-run homer, going back-to-back with Soler during a four-run first for the Royals. The 24-year-old Lynch (1-2), meanwhile, allowed five hits while striking out four without a walk in his fourth career start.

Jonathan Schoop extended his hitting streak to 15 games with a ninth-inning double and scored on Eric Haase’s single for the Tigers, who have lost a season-high seven consecutive road contests.

Host Cleveland scored twice in the eighth inning to beat Tampa Bay, snapping a streak of 11 consecutive head-to-head losses dating back to the 2019 season.

Down 2-1, Cesar Hernandez led off with a single through the infield then moved to second when Amed Rosario was struck on the hand. Cleveland tied the score on a single from Harold Ramirez, and Bobby Bradley gave the Indians their first and final lead of the day on a sacrifice fly to center.

The Rays, who had won the first three games of this four-game set, saw their five-game winning streak come to an end.

Rich Hill and Ross Stripling were locked in a pitchers’ duel before both teams broke through in the sixth. The 41-year-old Hill, who was acquired by the Mets from the Tampa Bay Rays on Friday, wound up allowing three runs on five hits and two walks while striking out one.

Stripling surrendered one run on five hits and no walks with six strikeouts.

After losing the series opener, the Mariners won three in a row — all by one run — to pull within 1 1/2 games of Oakland in the race for the American League’s second wild-card berth.

Max Stassi went 3-for-4 with a homer and triple, tying his career-high with three RBIs, and Shohei Ohtani hit his major league-leading 35th home run to lead Los Angeles to a victory over Minnesota in Minneapolis.

Jack Mayfield continued his hot hitting with an RBI double as Los Angeles climbed back to the .500 mark (49-49) by taking three of the four games in the series with the Twins. Jaime Barria (1-0), who gave up back-to-back home runs to the first two batters he faced, picked up the victory.

Max Kepler went 2-for-4 with a homer and Brent Rooker also homered for Minnesota, which dropped to 3-8 since the All-Star break. Danny Coulombe (1-1) suffered the loss.

David Bote homered in his first game in nearly two months, Kris Bryant and Anthony Rizzo connected on back-to-back home runs in the first inning and Trevor Williams pitched 6 1/3 shutout frames to lift Chicago to a victory against visiting Arizona.

Chicago improved to 5-5 since the All-Star break, a run that includes victories in four of six meetings with Arizona. The Diamondbacks became the first club in the major leagues to reach 70 losses this season.

Pavin Smith, who had two hits, and Bryan Holaday doubled against Williams for Arizona’s only extra-base hits of the afternoon. Andrew Young’s RBI single with two outs in the ninth helped the Diamondbacks avoid a shutout.

Deven Marrero, playing his second game of the season for his hometown team, homered, singled twice, stole a base and threw out a runner at the plate to lead host Miami over San Diego.

Padres third baseman Manny Machado, who like Marrero is a Miami native, hit his 17th homer of the season.

Marlins left fielder Lewis Brinson — another local who was born and raised in Fort Lauderdale — added a three-run homer as last-place Miami split the four-game series against playoff-contending San Diego.

Eli White smacked a home run, his sixth, to left field off Astros starter Zack Greinke with one out in the top of the fifth inning.

The advantage was short-lived as Toro turned on a 2-2 fastball with two outs in the bottom of the fifth, driving the pitch 380 feet to right for a 2-1 lead. An inning later, Kyle Tucker added a two-out single that scored Yordan Alvarez.

Will Smith hit a go-ahead home run in the eighth inning and Chris Taylor went deep twice as Los Angeles pulled out a victory against visiting Colorado.

Smith’s fourth homer in seven games barely cleared the wall in left-center field off Rockies right-hander Carlos Estevez (2-2). It was his 14th of the season.

Phil Bickford (1-1) pitched a scoreless eighth inning to earn the victory, while Joe Kelly earned his first save with a scoreless ninth inning.

LaMonte Wade Jr. belted two home runs and a double, Wilmer Flores triggered a three-run sixth inning with a homer and host San Francisco salvaged one of three from the last-place Pittsburgh Pirates.

Left-hander Alex Wood (9-3) combined with four relievers on a five-hitter to win his fourth straight decision. Wade had 10 total bases to become the second Giant with 10 or more total bases in a game this season, matching Wilmer Flores, who also went deep Sunday. Thairo Estrada also homered for the Giants.

Pittsburgh’s Adam Frazier was hitless in four at-bats and was removed after the top of the eighth amid reports he was traded to the San Diego Padres. Bryan Reynolds collected a pair for the Pirates, who had won the first two games of the series 6-4 and 10-2.