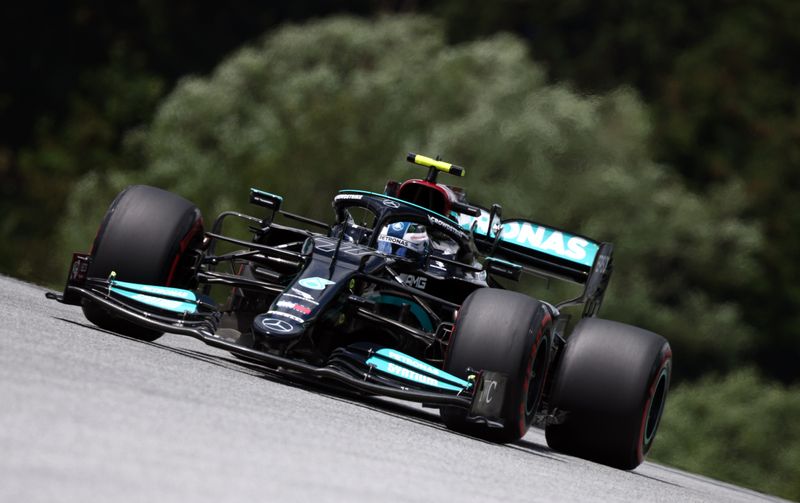 Red Bull’s 23-year-old Dutchman led both sessions, setting a best lap of one minute 05.910 seconds in the morning and then 1:05.412 in the afternoon on the soft tyres.

Mercedes’ seven times world champion Lewis Hamilton, 12 points behind Verstappen after seven races in a tough title battle, ended up fourth on the timesheets and said it was “a work in progress”.

“Generally over the day the car felt relatively solid. We’re losing on the straight a considerable amount (of time) so we’ve got to keep working to try to rectify that,” added the 36-year-old.

“I think the Red Bulls definitely will be really hard to beat, I think they’ve just got the edge — maybe more. We don’t know what they’re going to do when they turn that engine up.”

The Briton went faster than Verstappen in the second stint but his lap time was wiped for exceeding the track limits at the last corner when he went wide.

“Lewis was faster but his lap time got deleted so it looks a bit different than what is shown at the moment,” said Verstappen.

“But overall it has been quite good for us. Of course a few things to look into but I’m quite happy where the car is at the moment.”

Bottas, fourth and 12th, was summoned to stewards after losing rear grip and skidding sideways as he left the Mercedes pits, coming to a halt blocking the pit lane but narrowly missing the wall.

“That’s absolutely ridiculous,” McLaren said in a radio message to race director Michael Masi. “He could have taken our guys out there.”

Bottas said he had tried “something different” in getting out of the box.

“It’s a normal mistake, it happens,” he added.

Frenchman Pierre Gasly had been second for AlphaTauri in the first session but sat out the afternoon due to power unit problems.

Sunday’s race will be the first of two at Spielberg’s scenic Red Bull Ring.

Red Bull are chasing their fourth successive victory after winning in Monaco, Azerbaijan and France. The team last won four in a row in 2013, before the V6 turbo hybrid era ushered in seven years of Mercedes domination from 2014.

Ferrari’s Carlos Sainz was one of several spinners in the morning.

Red Bull’s Sergio Perez, the winner in Baku, ended up ninth after a morning spin.