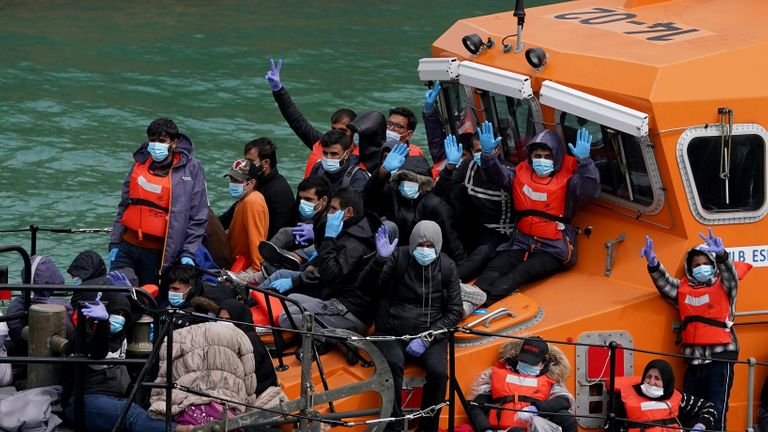 A bill which will make knowingly arriving in the UK without permission a criminal offence has passed its latest parliamentary hurdle.

The bill, which passed its second reading in the Commons on Tuesday evening by 366 votes to 265, will give Border Force officers the powers to turn back migrant boats attempting to cross the Channel from France and use “reasonable force, if necessary”.

Prison sentences for those who enter the country without permission will increase from six months to four years and a maximum of life imprisonment for convicted people smugglers will be introduced.

And, for the first time, the way an individual arrives in the UK – legally or illegally – will have a bearing on whether their asylum application is accepted.

The government hopes the post-Brexit overhaul of the asylum rules will deter migrants from attempting to cross the Channel.

But Labour have said the legislation may break international law.

And a coalition of more than 250 refugee charities and campaign groups have criticised the bill and urged the government to rethink its approach, with one calling the legislation “extreme and nasty”.

Chief executive of the Refugee Council, Enver Solomon, said the new bill risked preventing up to 9,000 people who have fled war and persecution from being given safety in the UK, despite being eligible under previous rules.

He described the legislation as the “anti-refugee bill” and accused the Home Office of “choosing to not only turn away those in need of safety but also treat them as criminals”.

The Home Office has insisted the changes will “prioritise those most in need of protection while stopping the abuse of the system”.

The 87-page bill also includes powers to allow claims to be processed outside the UK, potentially in offshore centres – something former prime minister Theresa May said she has “practical concerns” over.

It comes as data analysis by the PA news agency revealed more than 8,000 migrants have succeeded in making the dangerous trip across the English Channel so far this year.

On Monday, more than 430 migrants sailed across the English Channel to the UK – a new single-day record, passing the previous daily high of 416 set in September last year.

At the end of the year, there was a backlog of 109,000 cases being processed.

“Yet despite these failings, the measures being proposed in this bill do not deal with the chaos they have created,” he said.

“They don’t deal with the fact that the time taken to process claims has rocketed or desperate people are still falling victim to criminal gangs.

“Instead, they will reduce support for victims of human trafficking, potentially break international law, and there are still no effective, meaningful proposals to deal with the increasing number of people risking their lives crossing the Channel.”

But Ms Patel maintained the government is listening and acting on what the British people want.

“The British people have had enough of open borders and uncontrolled migration,” the home secretary told the Commons.

“Enough of a failed asylum system that costs the taxpayer over a billion pounds a year, enough of dinghies arriving illegally on our shores, directed by organised crime gangs, enough of people drowning on these dangerous, illegal, and unnecessary journeys.

“Enough of people trying to gain entry illegally, ahead of those who play by the rules, enough of foreign criminals – including murderers and rapists – who abuse our laws and then game the system so we can’t remove them.

“The British people have repeatedly voted to take back control of our borders. They finally have a government that is listening to them.”