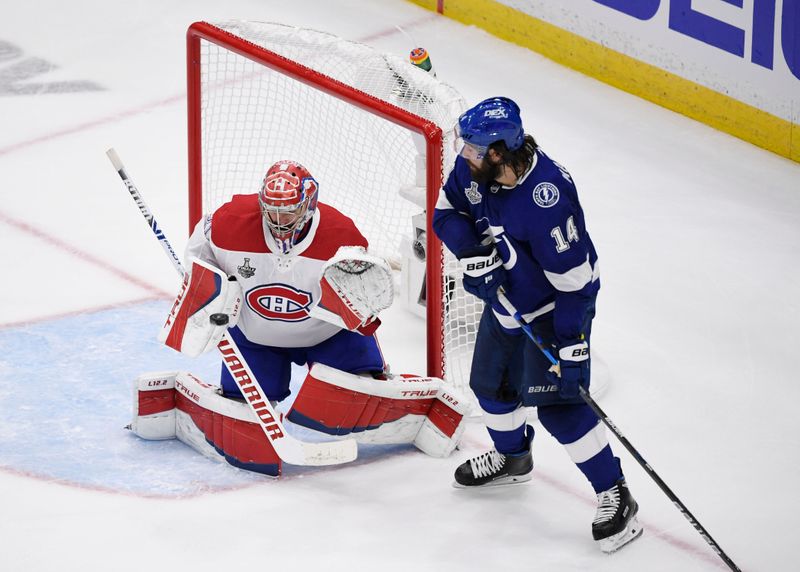 (Reuters) – The Tampa Bay Lightning kicked off their NHL title defense in dominant fashion on Monday by downing the Montreal Canadiens 5-1 in front of roaring hometown crowd in Game 1 of the best-of-seven Stanley Cup Finals series.

Slovakian defenseman Erik Cernak got the party started early for the heavily favoured Lighting with a redirect goal in the first period before Yanni Gourde extended the lead to 2-0 in the second as the Canadiens struggled to get a foothold into the game at Amalie Arena.

Montreal, who have defied the odds throughout the postseason as they look to end Canada’s 28-year Stanley Cup drought, showed signs of life later in the second as Ben Chiarot scored on a deflection but the Lightning dished out more pain in the third.

Left wing Ondrej Palat knocked the puck out of midair for Tampa Bay’s third score of the night and a laser from post-season points leader Nikita Kucherov extended the lead to 4-1.

With little more than a minute left on the clock, center Steven Stamkos scored the final goal of the night.

“The atmosphere in here was obviously awesome,” said Tampa Bay center Blake Coleman, enjoying the change of scenery after last year’s championship was clinched from within a quarantined ‘bubble’.

“You’ve got to be happy with the way we played and the way we finished them off in the third.”

It was a rough-and-tumble affair with a combined 115 hits. The Canadiens’ Brendan Gallagher was left bloodied in the third after Lightning defenseman Mikhail Sergachev wrestled him to the ice moments after losing his helmet.

The teams will meet in Game 2 in Tampa on Wednesday.