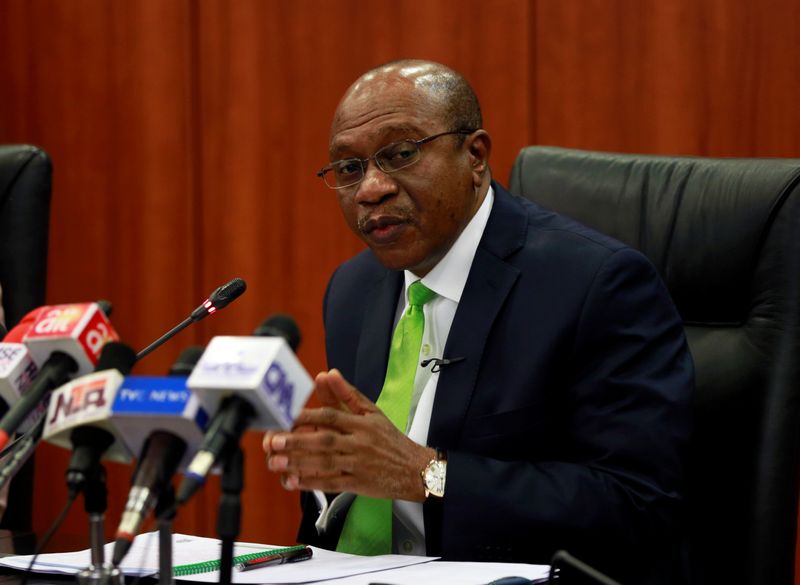 By Chijioke Ohuocha and Libby George

ABUJA (Reuters) – Nigeria’s central bank announced on Tuesday it was halting dollar sales to exchange bureaus, which it said had become a conduits for graft and illicit flows of money.

“It is a huge haemorrhage on our scarce foreign exchange reserves and it cannot continue,” the bank’s governor, Godwin Emefiele, said.

The decision by the central bank, which held the benchmark lending rate at 11.5% for the fifth time in succession, follows a request by the World Bank for Nigeria to provide a clearer and more predictable foreign exchange management system.

Nigeria has multiple exchange rates operating in parallel, a system put in place during a 2016 oil price crash because the government was seeking to avoid a large official devaluation of the naira as a matter of national pride.

Inflation has moderated after hitting multi-year highs this year because of the impact of the COVID-19 pandemic and falling oil prices, but foreign reserves remain under pressure.

Nigeria relies on oil for 90% of foreign exchange and another price crash last year severely limited its access to dollars.

The central bank has devalued the naira’s official rate three times since the pandemic took hold early last year, and has limited dollar access for imports, but a wide gap between the official naira exchange rate and the parallel market has persisted.

Emefiele said the bank would channel more foreign exchange to commercial banks for consumers who had legitimate needs, and that it would no longer process or issue new licences for bureau de change operators.

“We will deal ruthlessly with the Nigerian banks who have collaborated with these illegal foreign exchange operators,” he said.

He accused some international organisations and embassies of utilising illegal foreign exchange dealers to fund their local operations in “flagrant contravention of our foreign exchange laws and regulations in Nigeria.”

He said the bank would approach those organizations directly and also report them to relevant regulators.

The World Bank has also said economic growth has resumed in Nigeria after the COVID-19 shock but is lagging the rest of sub-Saharan Africa, with food inflation, heightened insecurity and stalled reforms increasing poverty.