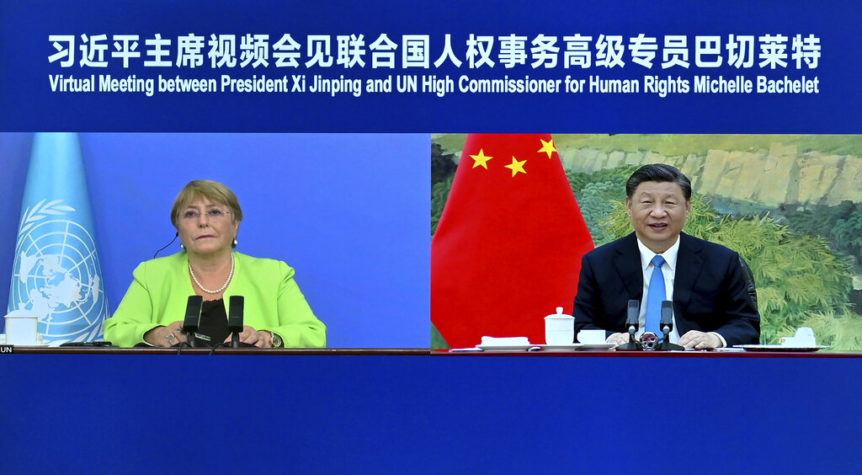 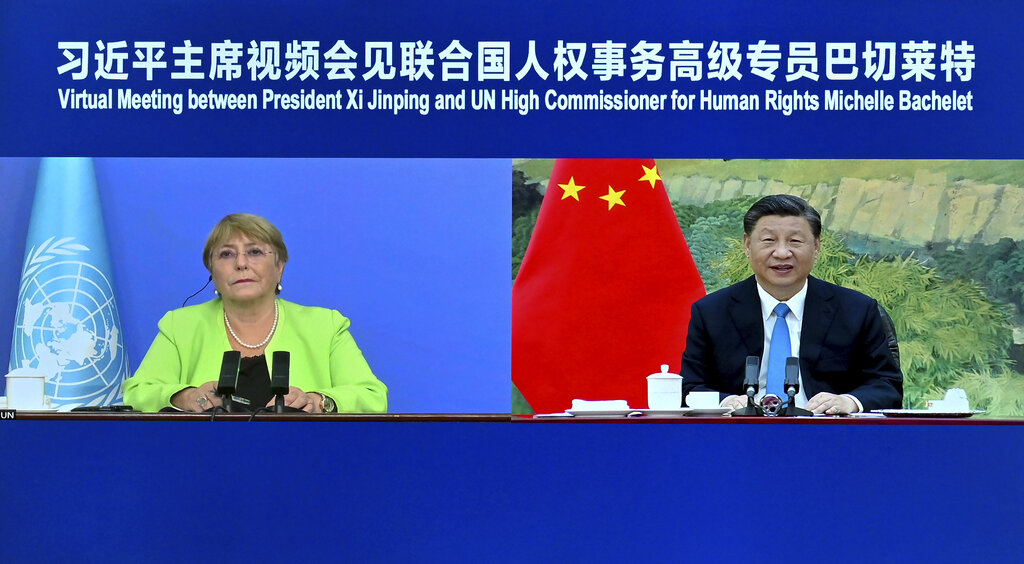 In this photo released by Xinhua News Agency, A screen showing Chinese President Xi Jinping, right, holds a virtual meeting with United Nations High Commissioner for Human Rights Michelle Bachelet, Wednesday, May 25, 2022. Xi defended China’s record to the top U.N. human rights official Wednesday, saying each nation should be allowed to find its own path based on its particular circumstances and criticizing those countries that lecture others on human rights and politicize the issue. (Yue Yuewei/Xinhua via AP)

Former United Nations envoy Nikki Haley said UN Human Rights Chief, Michelle Bachelet should be fired for seemingly legitimizing China’s genocide of Uyghur Muslims. On Wednesday, Haley asserted that Bachelet made a “Chinese propaganda tour” to the province of Xinjiang, where the acts are taking place.

Haley stressed, Bachelet’s talks with Chinese officials was an inappropriate normalization of China’s actions. This coms as the UN has faced criticism for not doing enough to punish China for holding up to 1 million Uyghurs in forced labor camps. Despite this, Chinese diplomats have repeatedly denied the harsh treatment of Uyghurs, specifically during Bachelet’s visit

“Xinjiang is not at all a human rights issue, but a major issue concerning upholding national sovereignty, security and territorial integrity,” Haley stated. “Clouds cannot overshadow the sun and truth will debunk all lies. China has made clear its stern position on the so-called Xinjiang report, and resolutely opposes smearing and attacking China with lies and disinformation.”

Michelle Bachelet, the head of the UN Human Rights Council, should be fired for looking the other way on genocide during her Chinese propaganda tour. https://t.co/ku4SKP8Lmm

Haley also said Bachelet was looking the other way on the suffering of Uyghurs while suggesting she doesn’t care about human rights. According to the National Review,  she also linked the trip to the Biden administration’s decision to rejoin the UN Human Rights Council. Haley expressed to reporters that she feels it’s shameful that President Joe Biden “justifies American participation in the farce known as the UN Human Rights Council.”