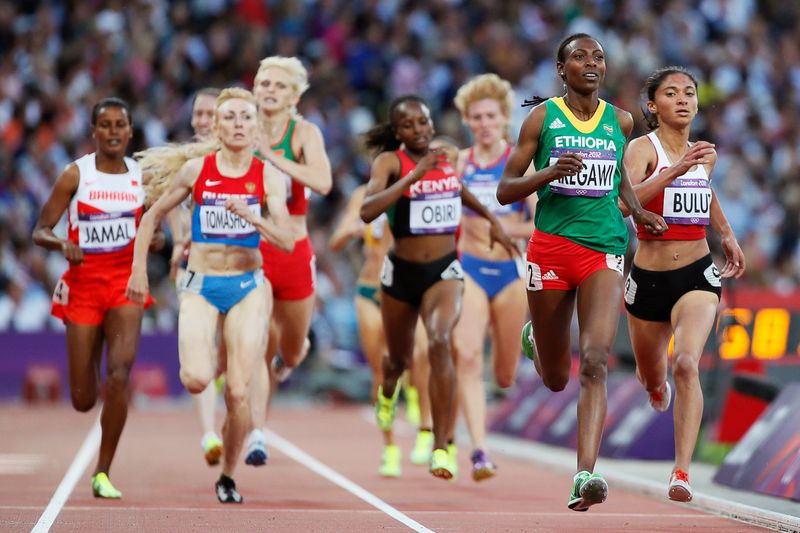 TOKYO (Reuters) – There are a few worthy contenders for the “dirtiest race in history” title but the 2012 Olympic women’s 1,500 metres probably takes the gold medal for not only the brazen nature of the cheating, but the sheer depth of it.

Athletics is by no means the only Olympic sport to be badly hit by doping cases over the last few decades but due to its premier profile and multiplied by the huge scale of Russian doping and evasion, it has endured a grim time.

It is somewhat laughable that no East German ever failed a test at the Games, that Ben Johnson, winner of a drug-fuelled 100 metres, was the only athlete to officially fail one in 1988 and that only four, none of them medallists, were caught in 1992.

More recently, advances in anti-doping protocols and particularly the re-testing of stored samples with new methods to reveal substances undetectable at the time of use, have produced some truly shocking numbers.

At the 2008 Beijing Games, 35 athletes were disqualified, with 22 medals later awarded to people who had been robbed of what for many would have been the highlight of their career and a potential life-changer in terms of sponsorship and other commercial opportunities.

At London four years later it was an astonishing 88 disqualifications, with 19 medals reallocated.

Making a singular contribution to that 2012 tally was the women’s 1,500m, where six of the top nine finishers, including the gold and silver medallists, were either subsequently banned or had returned to race from previous suspension.

The scale of the cheating was obviously astounding but barely anyone watching on the day would have been surprised that something was amiss with the Turkish 1-2 at the front.

Muscular powerhouse Asli Cakir Alptekin, who had already served a two-year doping suspension, crossed the line first but later had the victory annulled after being busted again and was given an eight-year ban.

Compatriot Gamze Bulut, who had improved her personal best by an astounding 18 seconds in the previous year but had no answers when pressed to explain it, finished second but was also later banned for abnormal blood levels.

Russia’s Tatyana Tomashova finished fourth but was promoted to the silver medal position despite having served a previous ban for switching urine during a test. Fifth-placed Ethiopia-born Swede Abeba Aregawi, promoted to bronze, tested positive four years later, though her ban was lifted on a technicality.

Belarusian Natallia Kareiva (seventh) and Russian Ekaterina Kostetskaya (ninth) were subsequently disqualified from the race for doping offences and two other athletes from the heats were also banned.

Briton Lisa Dobriskey finished 10th in the final and, prophetically, said: “I don’t believe I’m competing on a level playing field – people will be caught eventually, I think.”

Dobriskey had every reason to be furious having also been cheated out of a bronze medal in Beijing, pipped by Ukrainian Nataliya Tobias, who later tested positive for testosterone.

Results have also been horribly skewed on the infield, and had been for decades as the early days of testing failed to deter or catch the drug-fuelled giants setting marks that in many cases remain out of reach decades later.

At the Athens 2004 Games the men’s gold medallists in shot put, discus and hammer were all disqualified, as were the women’s shot gold and bronze medallists.

In Beijing the women’s hammer champion, silver medallist in the discus and silver and bronze in the shot were among an astonishing 17 women who stood proudly on the podium with their national flags raised, only to be later disqualified.

Things have improved markedly since those dark days, with only nine DQs and no medal reallocations in Rio, the exposure of wide-scale Russian doping and subsequent bans, and with the establishment of the independent Athletics Integrity Unit in 2017.

Those advances have tilted the balance back towards the clean athletes but it is a never-ending war, with each Olympics merely the highest-profile battleground.