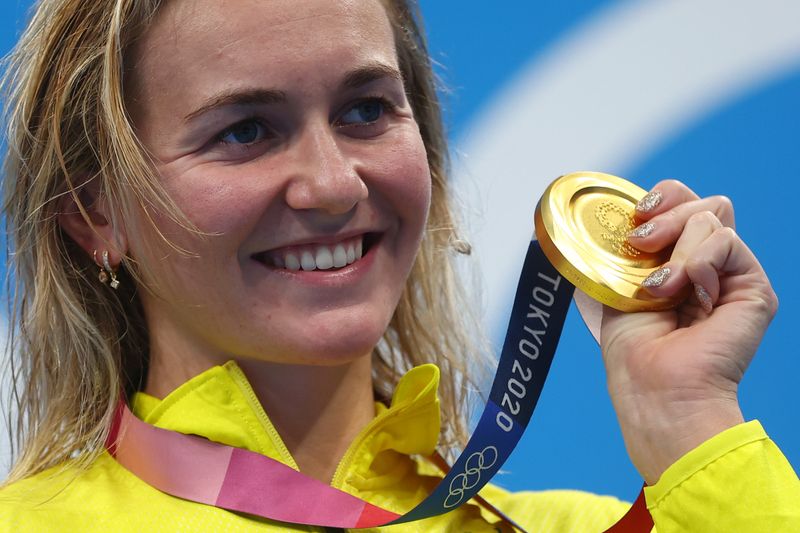 TOKYO (Reuters) – The great pool rivalry between Australia and the U.S. passed to a new generation on Monday when a 20-year-old known as “Terminator” hunted down the U.S. dominator https://www.reuters.com/lifestyle/sports/swimming-titmus-beats-ledecky-re-peaty-gold-britain-2021-07-26 of women’s distance swimming in a dramatic 400m freestyle final in Tokyo.

Australian Ariarne Titmus clawed back Stanford graduate Katie Ledecky’s early lead to win gold, delaying the American’s quest for the three more gold medals that would make her the most successful female Olympic swimmer of all time.

“I can’t believe it, I’m trying to contain my emotions,” said Titmus, who praised her rival for raising the bar in the sport.

“I thanked her, I wouldn’t be here without her. She set this incredible standard. All credit to her for the swimmer she is.”

Team USA got their victory in the 4x100m men’s relay, beating Italy by more than a second with Australia taking the bronze.

British swimmer Adam Peaty roared with pride after he became the first Olympic swimmer to defend an Olympic title with a gold medal in the 100m breaststroke. Canadian Maggie MacNeil stormed to victory in a close women’s 100m butterfly.

The high-stakes swimming finals, staged in the morning in Tokyo to reach prime time American television viewers, were held in a nearly empty aquatic centre with spectators banned because of COVID-19 restrictions.

The loud cheers of one fan, however, were heard across the world when video footage of Titmus’ coach Dean Boxall headbanging and dancing in the stands became a focus for NBC commentators and went viral, making him an instant Games meme.

Some Japanese sports fans defied Olympic organisers and gathered along the route of the triathlon on Monday, grabbing a rare opportunity to see live competition at the pandemic-hit Tokyo Games.

At the open air triathlon route on the island of Odaiba in Tokyo Bay, fans ignored Olympic staff carrying signs reading “to prevent the spread of infection, we ask that you refrain from spectating roadside” to watch Norwegian Kristian Blummenfelt take the gold.

“I think the risk of getting infected is extremely low, almost equal to zero,” said Masao Kitada, a 35-year-old finance worker standing at the roadside. “The Tokyo Games are very special, so I can’t miss this chance.”

Support for Japanese Prime Minister Yoshihide Suga slid nine points to 34%, its lowest since he took office, a survey showed on Monday, as worries about COVID-19 clouded his hopes the Tokyo Olympics would boost his ratings ahead of an election this year.

Nearly two-thirds of respondents to the July 23-25 Nikkei business daily survey said the country’s rollout of coronavirus vaccinations was not going well.

Japan has had some cheering news from the Games, taking five gold medals in the first two days of competition to tie with the United States. Only China tops them with six gold medals.

The host nation’s victories have included a historic two in judo by siblings Uta Abe and her brother Hifumi and another in Tokyo’s debutant sport skateboarding.

A roster of teen skateboarders that included Japan’s Funa Nakayama and Brazilian phenom Rayssa Leal clinched top spots in the preliminary heats to advance to the women’s street finals on Monday.

The street event is notable for the youth of its competitors. Japan’s Nakayama and Momiji Nishiya are 16 and 13 respectively and Leal is also 13 years old.