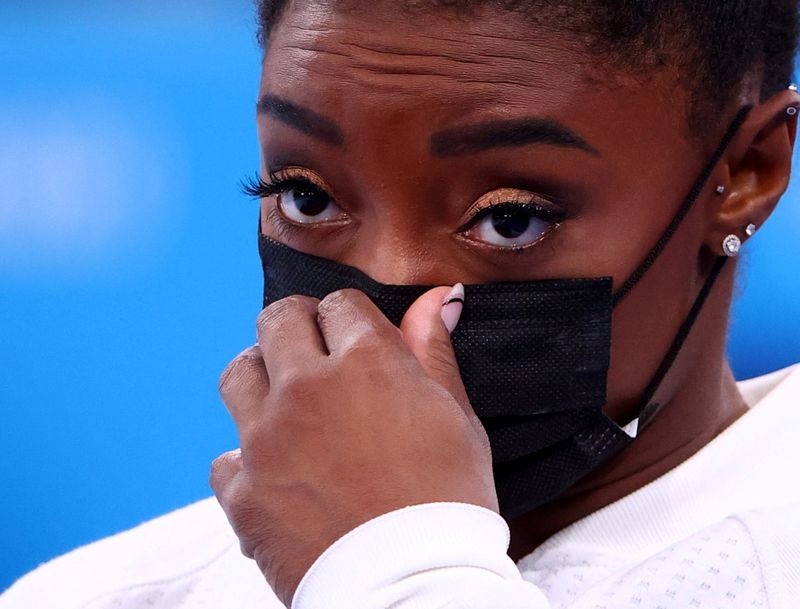 (Reuters) – The decision by American gymnast Simone Biles to prioritise her wellbeing at the Tokyo Olympics will go a long way in helping to fight the stigma of mental illness, an expert in the field said on Wednesday.

According to Ben Miller, a psychologist and president of California-based Well Being Trust, mental health has been marginalised in society for far too long and athletes speaking up on the topic should all be applauded.

“Other athletes that might have struggled with similar issues now feel like it’s OK for them to talk about it. There’s something very powerful in that moment,” Miller told Reuters in a video interview.

“You’re always going to have your detractors and people that say, ‘Oh well, they’re just making excuses because they didn’t perform well.’ Which I say that’s a shame. That is an example of stigma.”

Biles, who won four gold medals at the 2016 Rio Olympics, this week cited the pressure of living up to expectations and a need to protect her mental health for her decision to pull out of the team competition in Tokyo.

The 24-year-old American has subsequently also withdrawn from the individual all-around competition.

Miller said that while top athletes have trainers to help with the physical side of performance, a person’s mind is part of their body and should be cared for with the same diligence so they can manage the pressure of competing on a big stage.

This is especially crucial for athletes who had to endure a one-year delay to the Olympics due to COVID-19 and are competing amid strict protocols that have left them with no family support on site and without spectators at venues in host city Tokyo.

“We’re in the middle of a pandemic still, so there’s all that social disconnect, there’s no crowds to cheer you on, there’s a lot of things that COVID has amplified or magnified that I think are underneath a lot of this stuff,” said Miller.

“So, I think number one is that you need to have somebody in place that can address the mental health side of your health. If we don’t have that, then it’s just window dressing.”

Miller said ensuring athletes can get the mental health care they may need will go a long way in improving their overall wellbeing, not just for their performance, but for their lives.

“We take these athletes and we train them to the peak of physical performance. We teach them, we work with them, we push them, we challenge them, and it’s focused on their bodies,” said Miller.

“And by not paying attention to their minds, they’re never going to get as much out of their bodies. And in some cases, it actually might be their minds that are the things that limit their ability to be most affective.”

(Reporting by Kurt Hall in Mexico City and Frank Pingue in Toronto; Editing by Toby Davis)