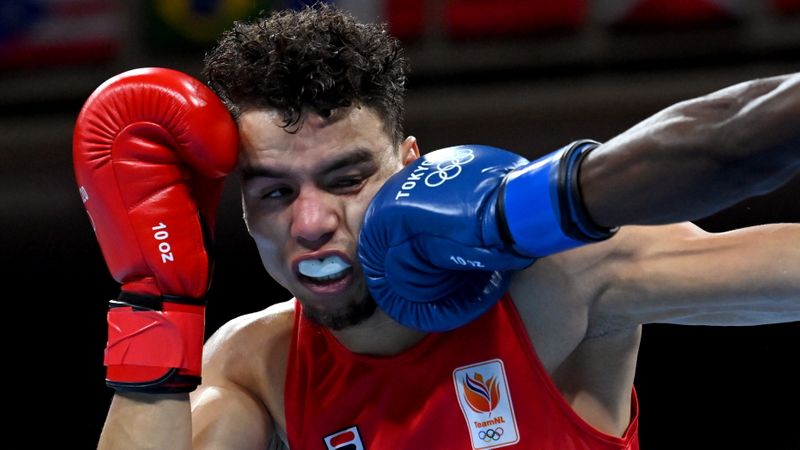 TOKYO (Reuters) – American Keyshawn Davis’s dream of winning an Olympic gold, improbable till last month, was back on track on Sunday when the men’s lightweight won his debut fight in Tokyo with a unanimous decision on points against Dutch Enrico Lacruz.

Davis, who needed professional help to manage anger issues a few years back, was removed from the United States team last year after a row over attending training camps for the Olympic qualifiers. It prompted him to turn professional in 2021.

His Olympic dream revived unexpectedly when last month he was offered a quota place for Tokyo through the IOC Boxing Task Force (BTF) rankings following his two silver medals at the 2019 world championships and Pan American Games.

“The gold medal is the one and only thing that I need to put in my resume. As of right now,” Davis, who won his first three fights as a pro, said after a comfortable outing against Lacruz.

“This is the only thing I’m focusing on. I never experienced anything like this before, and now that I experienced it, I’m glad that I got the opportunity to come back.

“I felt like I could have given more intensity, more output. I would give myself like a C-plus, B-minus.”

There was, however, heartbreak for Canadian boxer Mandy Bujold, who had to win a legal battle at the Court of Arbitration for Sport to get qualification criteria amended to make the trip to Tokyo.

Flyweight Bujold, who was reinstated after the court ruled that the BTF must accommodate women who were pregnant or had given birth during the qualification period, went down in a unanimous decision on points to Nina Radovanovic of Serbia.

Uzbek Tursunoy Rakhimova kicked off the proceedings on the second day of boxing at the Kokugikan Arena – the spiritual home of Japan’s sumo wrestling – with a 4-1 win on points against Pole Sandra Drabik.

Rakhimova will next meet top-seeded Turk Buse Naz Cakiroglu, with the 2019 world championships flyweight silver medallist having a bye in the first round.

Backing from team mates was the only support available for the boxers as they punched their way through the preliminaries.

Imam Khataev, competing in Tokyo as a representative of the Russian Olympic Committee because the country was stripped of its flag and anthem for doping offences, was too strong for Morocco’s Mohamed Assaghir.

The referee stopped the contest in the third round but Khataev will have a tougher outing next against Kazakh Bekzad Nurdauletov, the top seed in the men’s light heavyweight category.