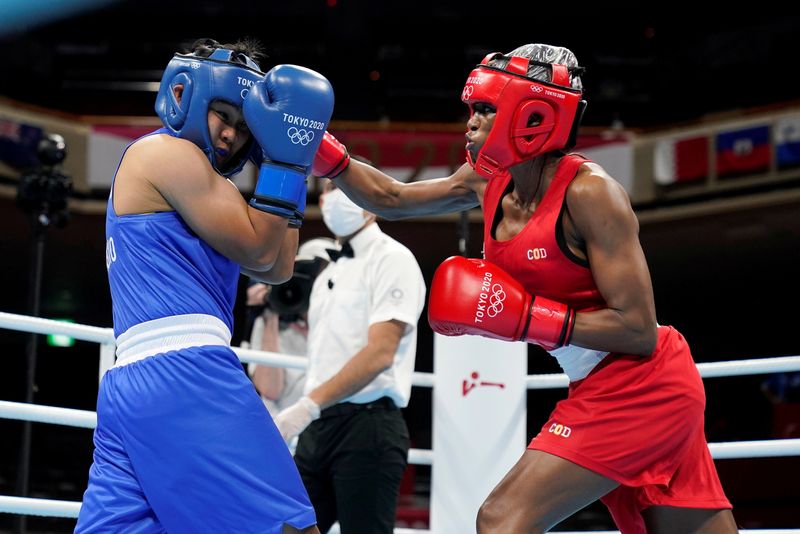 TOKYO (Reuters) -Ireland’s Kurt Walker overcame a cut over his right eye and a patchy second round to clinch a unanimous decision in featherweight Olympic boxing on Saturday, advancing to face top-ranked Mirazizbek Mirzakhalilov in the next bout.

The 26-year-old Irishman dominated much of his fight with Jose Quiles Brotons, peppering the Spaniard with jabs, although he came under fire midway and suffered a nasty cut that left his face bloodied.

The Tokyo Olympics boxing preliminaries kicked off in a near empty Kokugikan Arena, the 7,300-seat stadium usually home to sumo wrestling.

“I was dominant in the first and third rounds. In the second he gave his all but then he had nothing left for the third,” Walker said.

“I had to dig deep, but that’s a great first fight for me.”

He will now face top seed Mirzakhalilov on Wednesday. Known as the “Asian Tiger”, the 26-year-old Uzbek is looking to become the first featherweight to win Olympic gold while also being world champion in the division.

“He’s got two arms and two legs like myself so it doesn’t bother me,” Walker said about the world champion. “If you want to be the best then you have to beat the best.”

Born to a Ghanian father and a Japanese mother, the 25-year-old law graduate is one of a number of athletes, like tennis superstar Naomi Osaka, who illustrate Japan’s gradual shift to becoming a more multicultural society.

In women’s boxing, world champion Nesthy Petecio of the Philippines took a first step towards maiden Olympic gold in the featherweight division, with a unanimous decision over Marcelat Sakobi Matshu of the Democratic Republic of Congo.

The 29-year-old Petecio is tipped as a strong contender in the women’s featherweight class, which along with women’s welterweight, is making its debut at the Tokyo Olympics.

The addition of women’s weight classes was a welcome sign of more gender equality in boxing, said American featherweight Yarisel Ramirez, who lost her preliminary to Croatia’s Nikolina Cacic.

“The equality between both male and female has come a long way,” Ramirez said. “More women can compete now and yeah, I’m thankful for whoever went out there and pushed it through and made it happen.”

Transparency and gender equality are the highlights for boxing at the Tokyo Olympics as the sport aims to turn the page on the acrimonious 2016 Games which was marred by persistent disputes over judging quality.

Another featherweight, Japan’s Sena Irie, looked nimble in her unanimous defeat of the bigger Yamileth Solorzano of El Salvador. The 20-year-old Irie was inspired to take up the sport by a Japanese cartoon series, saying she admired the characters with the championship belt.

Britain’s Karriss Artingstall, in her Olympic debut, defeated Keamogetse Kenosi by unanimous decision, with the Botswanan looking fatigued by the third round.

“All I need to do is switch on from that first bell and I am capable of beating all of these girls here,” the 26-year-old said.

“As long as I am in there on my A game, I am a nightmare for anyone to beat.”