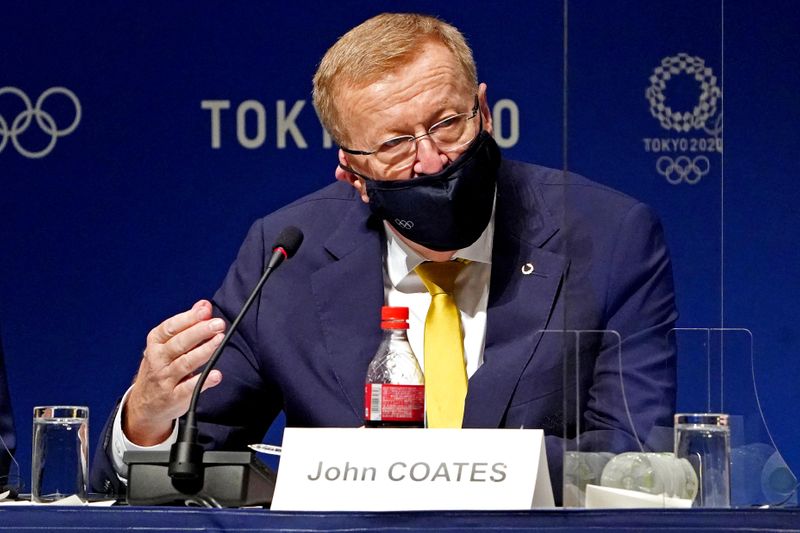 With around 13 million people locked down in Australia due to COVID-19 outbreaks, Palaszczuk was criticised by home media for travelling to Tokyo this week as a representative of Brisbane’s bid for the 2032 Olympics.

She had said she would not attend any events while in Tokyo apart from the bid team’s presentation to the International Olympic Committee (IOC) session on Wednesday, and would confine herself to her hotel.

However, her resolve crumbled in an awkward exchange with Coates late on Wednesday as the Australian Olympic Committee president set her straight.

“You are going to the opening ceremony,” Coates said at a media conference.

“I am still the deputy chair of the candidature leadership group.

“And so far as I understand, there will be an opening and a closing ceremony in 2032, and all of you have got to get along there and understand the traditional parts of that, what’s involved in an opening ceremony.

“So none of you are staying and hiding in your rooms, all right.”

Palaszczuk replied: “I don’t want to offend anybody, so…”

Coates continued: “You’ve never been to an opening ceremony have you?

“You don’t know the protocols, I think it’s a very important lesson for everyone here.

“Opening ceremonies cost in the order of $75 million to $100 million, it’s a major exercise for any organising committee.

“It’s my very strong recommendation that the premier and the lord mayor and the minister be there and understand it.”

Coates, one of the IOC’s most powerful executives, played a key role in securing the 2032 Games.

Appearing on an Australian breakfast TV show on Thursday, Palaszczuk was clear about her instructions.

“I’m going to do whatever John Coates tells me to do,” she said.

“I am not going to offend the International Olympic Committee now that we have been awarded the Games.”

(Reporting by Ian Ransom in Melbourne; Editing by Stephen Coates)