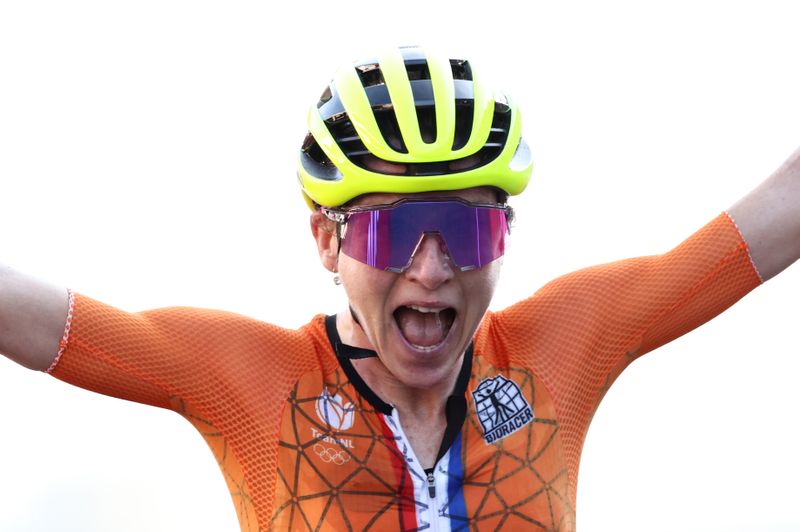 TOKYO (Reuters) – Annemiek van Vleuten bemoaned another Olympic mishap and broke down in tears as she explained a calamitous oversight after finishing second in Sunday’s women’s road race when she presumed she had won.

The Dutch rider, who had been a pre-race favourite and set her sights on a gold medal after a horrific fall ended her hopes in Rio de Janeiro five years ago, sprinted away in the closing stages from the chasing bunch to cross the line with a broad smile and fists pumping at the Fuji Speedway.

But her celebrations quickly turned to dejection when told she was actually second.

She had been unaware of an early break by unknown Austrian Anna Kiesenhofer, who rode clear of the field to record a sensational upset and grab gold.

Riders in the Olympic races do not have the assistance of radio, and the peloton were oblivious to Kiesenhofer’s dramatic 41km solo effort which saw the Austrian cross the line first in one of cycling’s biggest Olympic shocks.

“Yes… I thought I had won. I was wrong,” Van Vleuten tearfully told reporters as Dutch media labelled it a major blunder.

“I felt very stupid when I found out. We are talking here about miscommunication. I didn’t know what the situation was but neither did the rest.”

But she insisted she would quickly get over the calamity and might be back in three years’ time.

“My goal today was to be my best self ever and I succeeded. I mean, we can whine about the miscommunication for a long time, but I could have won gold here in this form. I did very well,” Van Vleuten said.

“Yeah, I’m really proud of it. I mean, it’s a silver medal, but it does have a bit of a shine to it. And it’s also my first medal, isn’t it? I do have an Olympic medal. A lot of people would kill for that.

“And yes, some things are out of your control and we will evaluate them. We might blame ourselves for not knowing about Anna Kiesenhofer, but I really can’t blame myself for anything else.”

At 38, Van Vleuten must now decide whether to try again in Paris in 2024. “That I can do this today makes me hungry again,” she added.

“Maybe I haven’t reached a plateau yet. If I stop now, I will really miss it.”