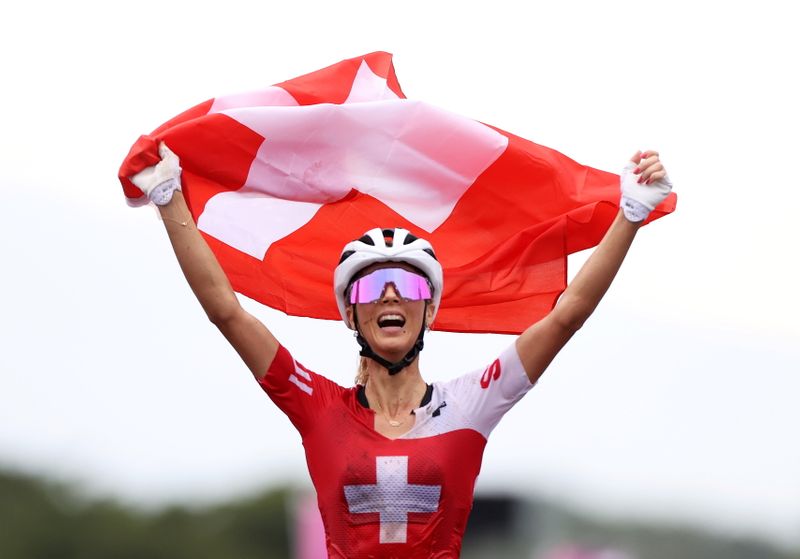 IZU, Japan (Reuters) – When Jolanda Neff crashed at high speed just before Christmas 2019 and ruptured her spleen, she thought her race-winning days were over, never mind her dream of Olympic gold in Tokyo.

But the Swiss mountain biker completed a remarkable recovery from her darkest moment to enjoy the biggest day of her career on Tuesday, romping to a sensational win on a treacherous and slippery Izu circuit.

The 28-year-old gave a masterclass in bike handling to lead a Swiss one-two-three – the country’s first sweep at an Olympics since 1936 – by a whopping winning margin of one minute 11 seconds.

Tears rolled down her cheeks as Neff reflected on her journey back to full fitness after she struck a pile of logs on a training ride in North Carolina.

It was an accident that also left the 2017 mountain bike world champion and winner of multiple World Cup races with fractured ribs and a crushed lung.

Had the Olympics taken place as scheduled last year she might not have made it – but the extra year gave her a chance and she took maximum advantage to outclass the field.

“It’s a pretty incredible story I think and it will take me some time to realise because I had my last big win in 2018 at the World Cup final and at the test event here in (October) 2019 and that was the last time I rode with spectators,” she said.

“I broke my hand six weeks ago, I didn’t ride off-road for the past six weeks, I only got back on the bike for the first time here and I can’t say how much it means to me.”

Neff, who was sixth at the Rio Olympics in 2016, is used to winning.

But the accident changed everything.

“I had a really tough time the last couple of years,” she told reporters. “Especially when you’ve won a lot before, it’s more tough when you suddenly don’t win any more.

Neff said the torrential rain that turned parts of the Izu course into a skid pan had played into the hands of her team as she was joined on the podium by Sina Frei and Linda Indergand.

Incredibly, Neff’s broken hand meant she arrived in Tokyo having not raced at all for six weeks.

“I remember the first day here when I was out here on the track I was just buzzing, I was so happy to ride my mountain bike again. That what I love most in the whole world.

“I just had such a good feeling for today, and when the rain came even more.”

Neff said while other teams had been caught out by the change in track conditions, the Swiss had done their homework.

“The whole course changed,” she said. “We went early this morning and had an hour on course practice, learning the new lines. I think all three of us really cleaned it up.”