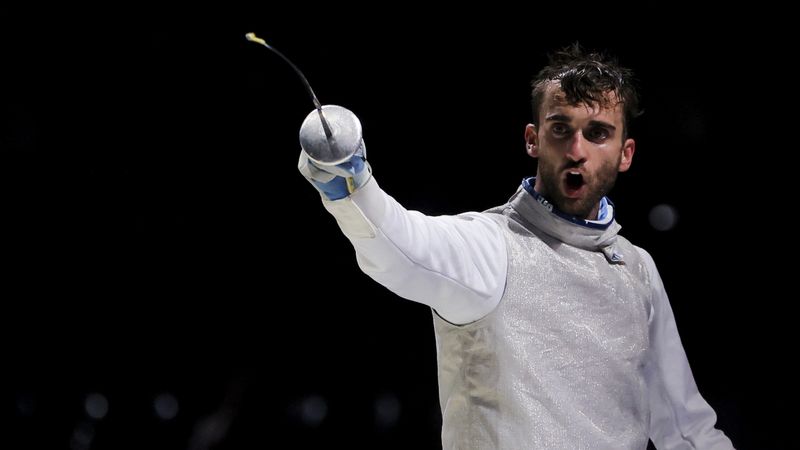 The Italian sometimes gave up the lead to Shikine, but eventually overtook the Japanese to win 15-9, cheered on by his own team mates in a venue with otherwise empty spectator seats.

Garozzo’s attacks were at times deftly knocked away by Shikine, who could land clear stabs at his opponent’s unguarded torso, but the Italian fought back with short and quick thrusts to ensure himself a place on the podium.

In the final he faces Cheung Ka Long, who will pick up Hong Kong’s first ever medal for fencing.

In the women’s individual sabre event, Russian Sofya Velikaya produced a dominant display in a 15-8 win over Czech fencer Anna Marton in their semifinal.

Velikaya, who has won eight golds at the world championships, is competing in her fourth Olympics. She captured individual silvers in the previous two Games, and a team gold, but is yet to claim an individual gold medal.

She will face Sofia Pozdniakova, who also represents the Russian Olympic Committee, in the final. Currently ranked 17th, Pozdniakova is the daughter of ROC President and former men’s sabre fencer Stanislav Pozdnyakov, winner of four gold medals and a bronze at the Olympics.

Manon Brunet of France, who lost to Pozdniakova in the semis, beat Marton to win the bronze medal.

Monday brought a string of big upsets in both the men’s and women’s competitions, with top-ranking fencers exiting early.

Gold medal favourite for the women’s sabre Olga Kharlan and high-ranked Gerek Meinhardt were knocked out earlier in the competition.

World championship winner and medal contender Enzo Lefort was then eliminated in the quarterfinals by Garozzo.

“With the special year where we didn’t have a lot of competitions to get ready for this event…everyone didn’t know the strength of the opponents,” Lefort said after his bout.