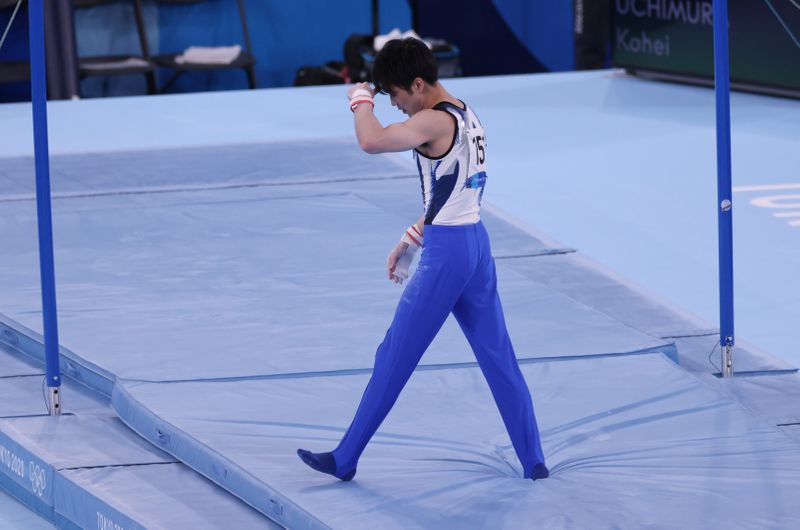 TOKYO (Reuters) – The reign of Japan’s “King Kohei” Uchimura, two-time Olympics all-around champion and holder of seven Olympic medals, came to an abrupt end on Saturday when he failed to qualify for the apparatus final, closing his storied Olympic career.

Uchimura, 32, was one of the best male gymnasts of all time, winning every meet he entered in two full Olympic cycles and becoming the first man in 44 years to top the individual all-around podium in back-to-back Olympics with a nail-biting final in Rio 2016.

But age and injury took their toll, and Uchimura, known for his focus on “beautiful” gymnastics and steely resolve towards training, decided to concentrate solely on the horizontal bar to give his battered shoulders a break.

On Saturday he was going strong when he suddenly crashed to the floor. He got up and finished his routine, but the writing was on the wall and he was grim as he left.

He barely squeaked onto Japan’s Olympic team earlier this year in a tie-breaker after which he ruefully referred to himself as an “old fogey” compared to his teammates, some of them a decade younger.

During Wednesday’s training session he fell as well, but told Japanese media “Overall, the feeling was good.”

Uchimura, born into a family of competitive gymnasts, has said he intends to quit after the Olympics.

After making the team, Uchimura confessed to mixed feelings.

“My performance wasn’t one I could really accept, and when I finished I thought I wouldn’t be going to the Olympics. When told I would, more than being happy I thought ‘is this really okay’?” he said.

“I don’t feel that after today’s performance I deserve to be called ‘king.’ I’ll really need to practice before the Olympics.”