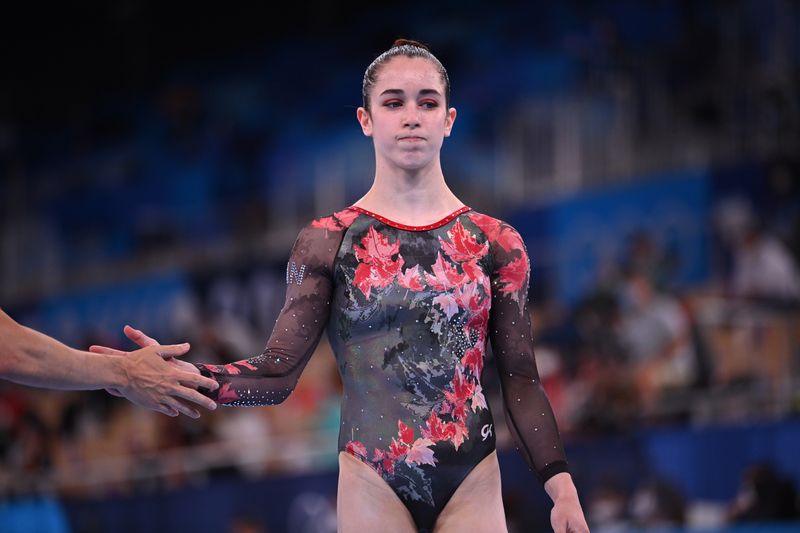 TOKYO (Reuters) – The female gymnasts who would not have met age eligibility criteria if the Tokyo Games had been held in 2020 are relishing their unique Olympic experience as an unforeseen – and controversial – chance to perform on the world’s biggest stage.

The postponement of the Games because of the COVID-19 pandemic posed a dilemma for the International Gymnastics Federation, the sport’s governing body, which requires female artistic gymnasts to turn at least 16 in an Olympic year to be eligible.

The federation decided to allow those turning 16 in 2021 – instead of 2020 – to compete in Tokyo in light of the postponement, something that has stirred debate within the sport.

Many gymnasts and coaches argued that age rules should not have taken the postponement into account because they now widen the pool of athletes eligible and threaten to squeeze out more experienced gymnasts.

One of the beneficiaries of the decision is now a podium threat.

Viktoria Listunova, born in May 2005, is part of the Russian Olympic Committee team that finished first in team qualifying.

The 16-year-old, who also reached the floor final, has approached her first Olympics with nonchalance.

“I just treated it like another competition taking place once every four years,” said Listunova, the reigning European all-around champion. “But only this time it is taking place once in five years for the first time in history.”

For Canada’s Ava Stewart, who turns 16 in September, the Tokyo Olympics marked the first time she has travelled without her parents and her first time out of North America.

“I didn’t think about it being international or anything like that,” said Stewart, who did not qualify for apparatus finals.

“I’m still going to try to go for 2024 (Olympics). That never changed. It’s just the fact that I got the opportunity to see what an international competition was, even if I didn’t treat it that way.”

Jutta Verkest of Belgium, 15, recognises that what has been a coronavirus-triggered advantage for her has soured the atmosphere of an event that is the highlight of many athletes’ careers.

“I think that nobody is happy to have coronavirus … because imagine if the Olympics could have taken place without all these masks?” said Verkest, who turns 16 in October and will compete in the all-around and team finals.

“Then I would not have been part of it, but everything would have been much bigger and very different.”