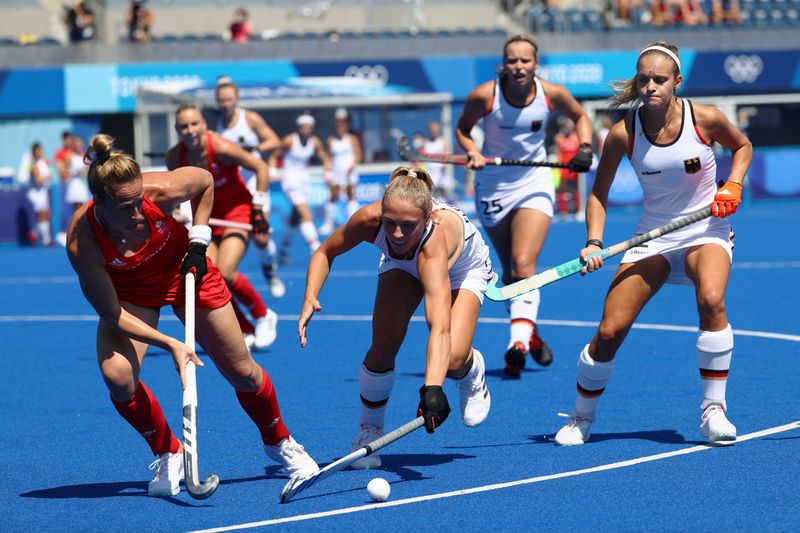 After both sides took a knee before the opening whistle, the British women moved aggressively against their opponents, taking an early lead in the 13th minute when midfielder Sarah Jones netted the ball behind German goalie Julia Sonntag.

Germany pulled level in the 24th minute when Viktoria Huse scored her 10th international goal with a penalty stroke, setting the stage for the 2-1 victory.

Charlotte Stapenhorst scored the winning goal for the Rio bronze medallists shortly after the halftime break.

“It’s a nice feeling to start with a win especially against the gold medallist,” Huse said.

“We know them quite well so it was a very tough game with us lucky at the end.”

Britain’s captain, Hollie Pearne-Webb, praised her team’s positive start and performance, despite losing their first Olympic match since the semi-finals at the 2012 London Olympics.

“We all know that we’re still in this. Game one is out of the way and it’s a marathon, not a sprint,” she said.

Officials doubled the usual two-minute breaks between quarters to allow players to cope with the heat at the unshaded main pitch of the Oi Hockey Stadium.

The pitch was also sprayed with water during the longer half-time break to keep play fast and smooth.

New Zealand defeated Argentina with a clean 3-0 score in Pool B, netting all goals in the second half.

Despite showcasing their dribbling skills and passionate play, Argentina could not break the Black Sticks’ defence, missing six penalty corners.

“There’s some fantastic defence and fantastic players that we have, but winning one game doesn’t win you a gold medal. It’s a long road there.”

In other Pool B matches, China defeated host Japan 4-3, while Australia also won their first match of the tournament, beating Spain 3-1.

The Hockeyroos were down 0-1 at halftime but turned the tide in the second half through field goals by Ambrosia Malone and Emily Chalker as well as a penalty corner by Grace Steward.