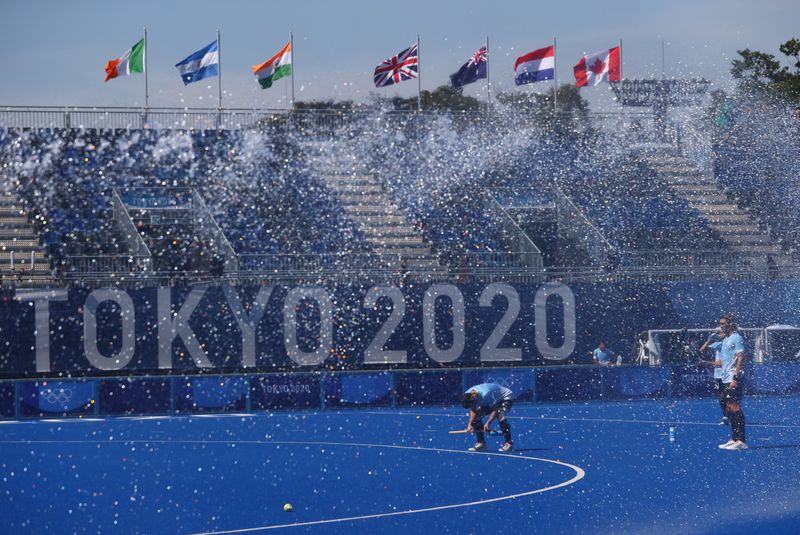 TOKYO (Reuters) – The risks of a major natural disaster striking during the Olympics are small but can not be discounted in Japan, which contends with earthquakes, tsunamis, typhoons, floods and erupting volcanoes.

The consequences of a disaster during the Games, which start on Friday, would be compounded by the coronavirus pandemic that has already delayed the Games by a year. The deaths of at least 15 people in landslides in southwest Japan earlier this month were a stark reminder of the danger.

“The chance on any given day of a major earthquake is very small but it’s not zero,” said Robert Geller, seismologist and emeritus professor of the University of Tokyo.

On maps and signs around Tokyo and Olympic venues, the symbol of a small green human figure stepping into a green circle illustrates evacuation routes and safety zones should some disaster occur.

Located in the “Ring of Fire” arc of volcanoes and oceanic trenches encircling the Pacific Basin, Japan accounts for about 20% of the world’s earthquakes of magnitude 6.0 or greater. On average, it experiences a quake every five minutes.

Despite its sophisticated tsunami warning systems, Japan was caught largely by surprise by the 8.9 magnitude earthquake and subsequent tsunami in 2011 that killed nearly 20,000 people and destroyed a nuclear power plant.

“Even though Japan is pretty well prepared for earthquakes, the building standards are pretty good, but nothing is ever perfect,” Geller said.

While Japanese citizens have drilled for earthquakes for years, overseas visitors may not know what to do.

Still, Olympic organisers say they are prepared for all eventualities.

“When these things happen, we have to promptly tell delegations and the party involved what to do, so we are making preparations with the help of the government,” said Seiko Hashimoto, the President of the Tokyo 2020 Organising Committee.

Additionally, COVID-19 hangs over all of these preparations, with dozens already testing positive or isolating after being designated as close contacts.

A major disaster during the Olympics and Paralympics that causes evacuees to huddle in close quarters could be devastating in terms of COVID-19 spread, Geller warned.

“People in Japan who work on disaster prevention are actually worried about that a lot. If you have another disaster on top of COVID, everything is worse,” he said.