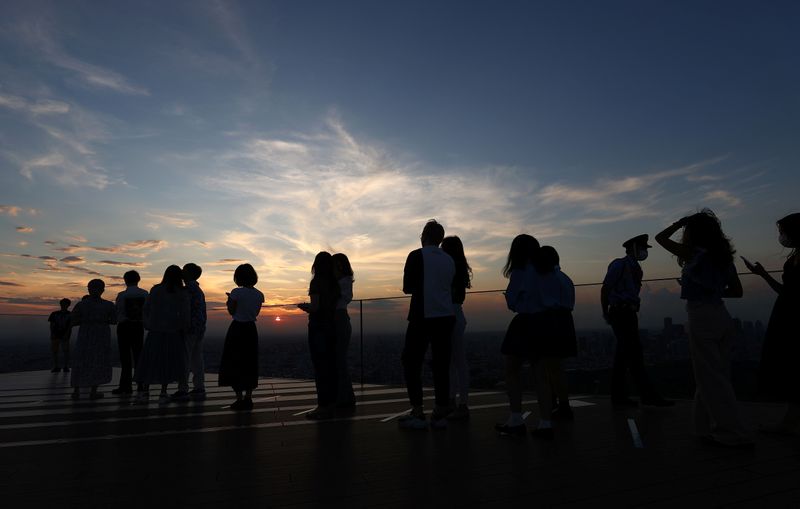 People queue up to get their picture taken in front of the sunset on top of Shibuya Sky observation deck, ahead of the Tokyo 2020 Olympic Games, in Tokyo, Japan, July 19, 2021. REUTERS/Kai Pfaffenbach

By Karolos Grohmann and Ju-min Park

TOKYO (Reuters) -International Olympic Committee (IOC) President Thomas Bach said on Tuesday the Tokyo Games would send a powerful message of “peace and solidarity”, even as more athletes tested positive for the coronavirus that is overshadowing the sports event.

The Games, postponed last year because of the novel coronavirus pandemic, open on Friday but will be without spectators after Japan’s decision earlier this month to leave venues empty to minimise the risk of infections.

Two members of Mexico’s Olympic baseball team tested positive for COVID-19 at the team hotel before their departure for the Tokyo Olympics, the country’s baseball federation said.

The athletes, Hector Velazquez and Sammy Solis, who tested positive on July 18, have been isolated, as have all team members pending results of more tests, it said.

Bach, speaking after a moment of silence at an IOC session where he was joined by Japan’s prime minister, said organisers could never have imagined the “unpredented challenges” to brining the global sports event to Tokyo.

“We could only overcome all these challenges for the Olympic Games because throughout the past eight years we were enjoying a trustful partnership (with Japan). We could always rely on you,” he said.

Comments by Bach and other IOC officials have in the runup to the Games sparked outrage on social media in Japan for appearing to dismiss concerns about the pandemic.

As COVID-19 cases rise in Tokyo, public concern has grown that hosting an event with tens of thousands of overseas athletes, officials and journalists could accelerate infection rates in Japan’s capital and introduce variants that are more infectious or deadlier.

Organisers have promised to keep the Games “safe and secure” with an Olympic “bubble” that limits participants’ movements and mandates frequent testing, but experts see gaps.

The first major test of how an Olympics can be held in the midst of a pandemic may well come on Thursday in the men’s soccer tournament when Japan face a South Africa side that could struggle to field 11 players due to the novel coronavirus.

“It’s obvious that the bubble system is kind of broken,” said Kenji Shibuya, the former director of the Institute for Population Health at King’s College London. [L4N2OW0F4]

“My biggest concern is, of course, there will be a cluster of infections in the (athletes’) village or some of the accommodation and interaction with local people,” Shibuya added.

There have been 67 cases of COVID-19 infections in Japan among those accredited for the Games since July 1, when many athletes and officials started arriving, organisers said on Tuesday. That did not include those at local training camps.

Japan has recorded more than 838,000 cases of COVID-19 and around 15,000 deaths. Host city Tokyo is experiencing a fresh surge, with the seven-day moving average of cases at just over 1,100 as of Monday.

A rocky vaccination rollout has added to concerns. About one-third of Japan’s population has had at least one vaccination shot and about 22% are fully vaccinated, one of the lowest rates among wealthy countries.

Days before the opening ceremony in Tokyo, 68% of respondents in an Asahi newspaper poll expressed doubt about the ability of Olympic organisers to control coronavirus infections, with 55% saying they were opposed to the Games going ahead.

Bach praised the “heroic efforts” of medical personnel and volunteers around the world amid the pandemic, and said that cancelling the Games had never been an option for organisers.

“The IOC never abandons the athletes. Therefore, we took an unprecedented decision to postpone the Games (last year). Today I can admit we did not know how complex this would be,” he said.

Japanese Prime Minister Yoshihide Suga – who has seen his support rate slide since he took office last September, largely due to his handling of the pandemic – said organisers would do everything necessary for safe Games even without spectators.

“But the significance of Tokyo will not be reduced by this,” Suga said in a brief address. “Now is the time to unite.”

Bach also said that World Health Organization Director-General Tedros Adhanom Ghebreyesus would be in Tokyo on Wednesday to “share his thoughts with us in a keynote speech”.