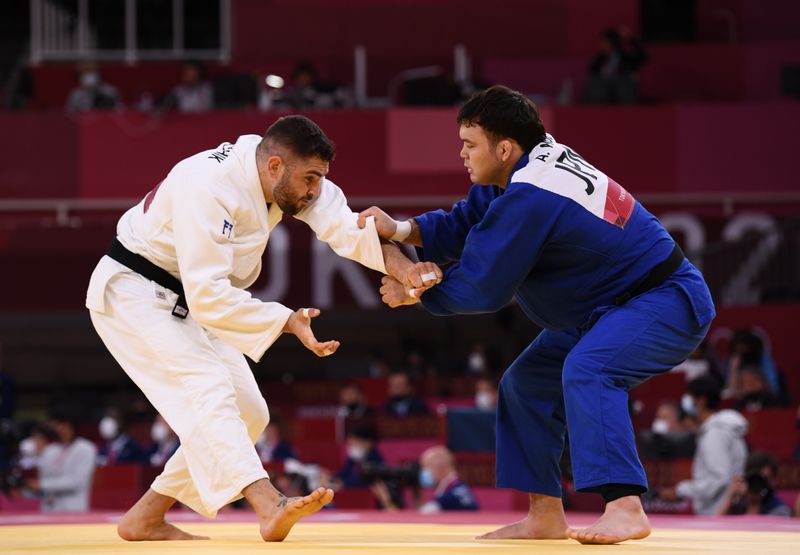 TOKYO (Reuters) -Japan’s Aaron Wolf and Shori Hamada grabbed gold medals in their respective judo finals on Thursday, taking the host nation’s tally to eight golds from the sport at the Tokyo Games and matching their record haul from Athens 2004.

Wolf, whose mother is Japanese and father is from the United States, beat Uzbekistan’s Mukhammadkarim Khurramov to make it to the quarters, where he overcame Israel’s Peter Paltchik.

In the semi-finals, Wolf beat Georgian Varlam Liparteliani, the world number one and Rio silver medallist, with a dynamic o-uchi-gari throw to score a waza-ari victory.

South Korea’s Cho won silver, while the bronze medals went to Jorge Fonseca of Portugal and Niiaz Iliasov of the Russian Olympic Committee.

Earlier, Hamada, 30, had pinned Beata Pacut of Poland for an ippon victory in the elimination round of 16, then beat Aleksandra Babintseva of the Russian Olympic Committee via sliding lapel choke to reach the semis.

Hamada, ranked two in her division, beat German Anna Maria Wagner with a cross armlock for an ippon victory in semi-finals.

The bronze medals went to Wagner and Mayra Aguiar of Brazil.