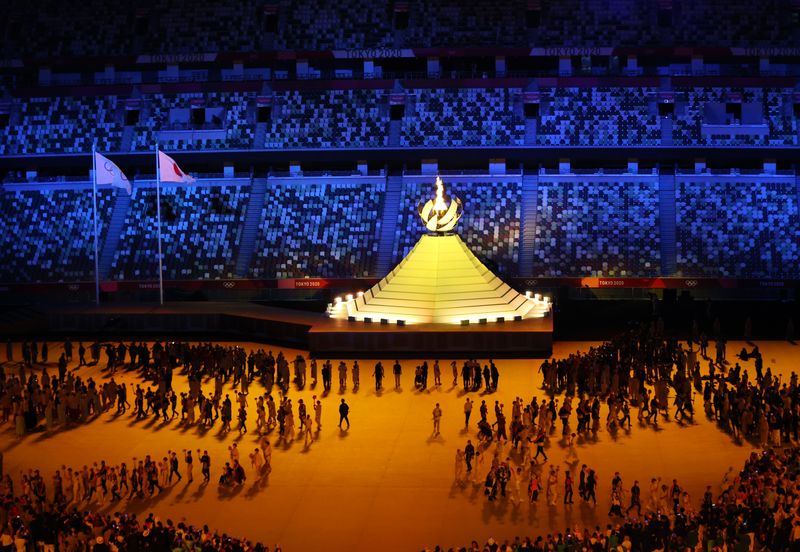 TOKYO (Reuters) – Drones and other high-tech marvels were on parade at the Tokyo 2020 opening ceremony on Friday, but some of the most heartfelt moments were a look back to the past – 1964, when the Japanese capital became the first place in Asia to host the Games.

Those Olympics have long been a touchstone of national pride, marking Japan’s return to the global stage fewer than 20 years after its devastating defeat in World War Two and ushering in a period of robust economic growth and technological innovation.

Eager to watch the Olympics, broadcast live for the first time, many bought their first televisions – even though a black-and-white set cost nearly a month’s salary. Buoyed by the Olympic mood, many snapped up other goods, aspiring to own the “Three Cs” – cars, coolers (air conditioners), and colour TVs.

Elsewhere, The Beatles made their debut trip to the United States, where “I Want to Hold Your Hand” was their first chart-topping hit, and Martin Luther King Jr was awarded the Nobel Peace Prize.

About half an hour into the ceremony, giant wooden rings and paper lanterns traditional at Japanese summer festivals were carried out into the stadium, recalling that moment of triumph.

The rings were made of timber from trees that grew from the seeds borne by athletes from nations participating in the 1964 Games.

Later, there was a punchy, anime-style acting out of the Pictograms for each sport – an innovation made at Tokyo 1964 to help foreigners who wouldn’t understand Japanese that has now become an Olympic tradition, with each host nation creating their own for the Games.

Emperor Naruhito, who opened the Games as his grandfather Hirohito did in 1964, has spoken with pleasure of his own memories of watching the marathon and other events as a four-year-old.

Unlike his grandfather, though, he used a word in Japanese that is closer to “commemorate” than celebrate.