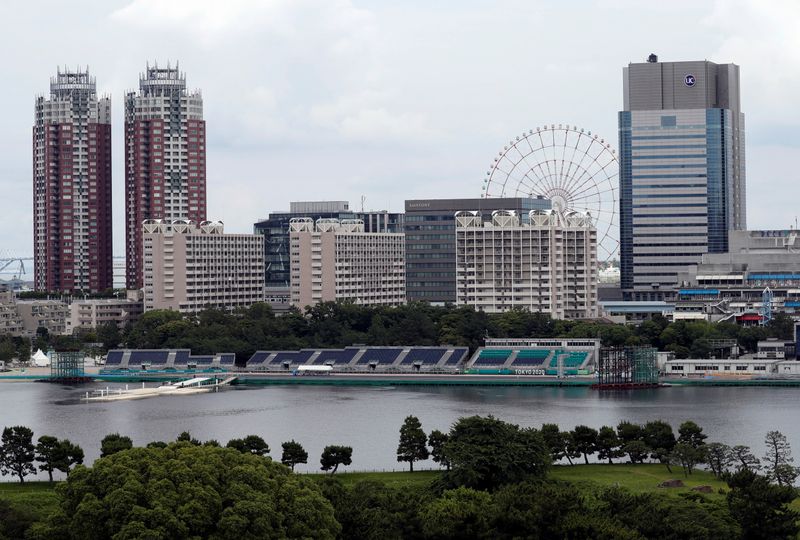 A general view shows Odaiba Marine Park, the venue for Marathon Swimming and Triathlon events during the Tokyo 2020 Olympic Games that have been postponed to 2021 due to the coronavirus disease (COVID-19) outbreak, in Tokyo, Japan June 22, 2021. REUTERS/Issei Kato

By Mitch Phillips and Tim Kelly

TOKYO (Reuters) – Olympic officials are confident their anti-pollution measures will prevent an expected tropical storm from triggering a surge of sewage into the waters of Tokyo Bay – just in time for next week’s triathlon events.

There have long been concerns over the cleanliness of the area’s water, which will also host the marathon swimming events, and a para-triathlon was cancelled two years ago because of dangerous levels of E.coli detected.

The men’s Olympic triathlon takes place on Monday, with the women’s on Tuesday – when the storm is expected to hit.

With a potential typhoon forecast, huge volumes of water could join the sewage flow and surge into the relatively shallow bay. Previously such occurrences have led to a foul stink and high pollution levels but a Tokyo 2020 spokesman told Reuters the safety measures in place should keep the athletes safe.

“We have installed triple-layer screens as a measure to help ensure water quality,” the spokesman said. “As well as thereby preventing the inflow of E.coli bacteria after rainfall, through daily monitoring of water quality and the weather we aim to stabilise water temperature by opening the screens during periods of fine weather when water quality is stable.

“Furthermore, water flow generators have been introduced to deal with rising water temperatures when the underwater screens are closed. Among other actions, we will be carefully monitoring their operation when water temperatures approach the standards specified by the international federations.”

A Tokyo Metropolitan official said that E.coli levels in Tokyo Bay increase when it rains because sewage is flushed out from the city. Most part of Tokyo and surrounding prefectures do not have a system that separates sewage from rainwater.

“The Odaiba area (where the swim events take place) separates sewage from rainwater, but when it rains the sewage flows down from other parts of Tokyo,” he said.

Since the problems in 2019, officials have deposited 22,200 cubic metres of sand into the bay to create an environment for organisms that help clean the water, as well as installing the three-layered polyester screens to protect the swimming areas.

It is not the first time an Olympic swim venue has been dogged by pollution concerns, with Rio 2016 widely condemned for its conditions.

Asked if he had any concerns about the Tokyo waters, Hugh Robertson, president of the British Olympic Association, told Reuters: “This is a bit of a hardy perennial that has come up before at least the last four Games and I think it’s less of an issue here than it was in Rio. We haven’t currently got any specific concerns about water quality.”

The governing bodies of triathlon and swimming did not respond to Reuters’ request for comment.