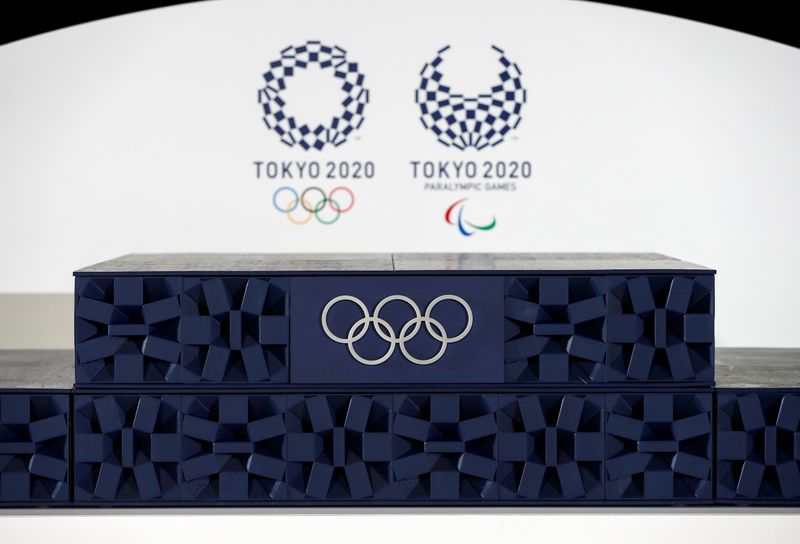 FILE PHOTO: A podium that will be used for the victory ceremonies of the Tokyo 2020 Olympic and Paralympic Games is displayed during the unveiling event at Ariake Arena in Tokyo, Japan June 3, 2021. REUTERS/Issei Kato/Pool

TOKYO (Reuters) – Opposition to the International Olympic Committee’s ban on podium protests at the Tokyo Games intensified on Friday with more than 150 athletes, academics and social justice advocates signing an open letter demanding changes to Rule 50.

The IOC earlier this month relaxed the rule, which had previously forbidden athletes from any protests but now allows them to make gestures on the field provided they do so without disruption and with respect for fellow competitors.

However, there is still a threat of sanctions if protests are made on the podium during the Games.

The letter said it was adding “a collective voice” to calls for amendments to Rule 50.

Among the signatories were Black U.S. sprinters Tommie Smith and John Carlos, who were expelled from the 1968 Olympics after they bowed their heads and raised black-gloved fists on the podium to protest racial inequality.

The Muhammad Ali Center also signed the letter, with the late boxing world and Olympic champion’s cauldron lighting at the Atlanta 1996 Games having become an iconic moment of Olympic history.

The letter called for no sanctions to be imposed on athletes who protested on the podium in Japan and demanded a review of Rule 50 after next year’s Beijing Winter Olympics.

British track and field medal hope Dina Asher-Smith also joined the chorus of opposition as she prepared for the Games.

“Protesting and expressing yourself is a fundamental human right,” she told reporters. “If you were to penalise someone for standing up against racial inequality how on earth would that go? How on earth are you going to enforce that?”

“When people feel strongly about something, particularly when it’s something that’s so close to your heart – and as a Black woman you think about racism – I just think you can’t police people’s voice on that.”