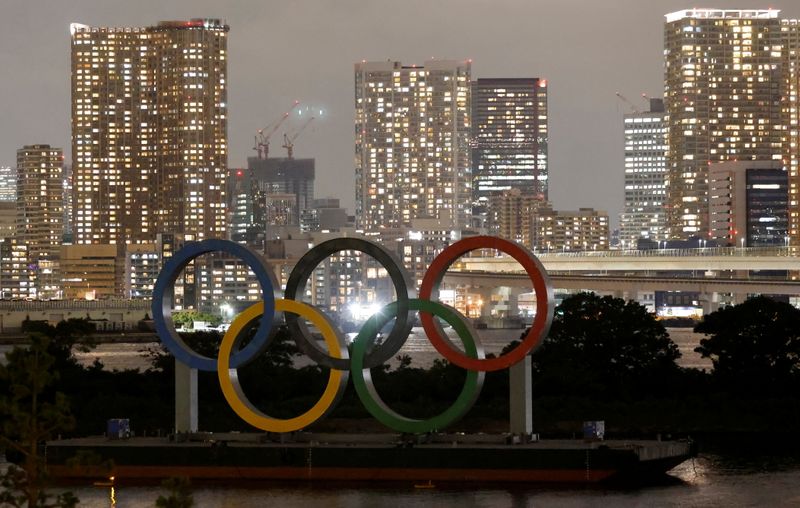 FILE PHOTO: The Olympic Rings installed on a floating platform are seen in front of the city skyline ahead of the Tokyo 2020 Olympic Games that have been postponed to 2021 due to the coronavirus disease (COVID-19) pandemic in Tokyo, Japan July 14, 2021. REUTERS/Fabrizio Bensch

TOKYO (Reuters) – The Olympic refugee team will start arriving in Tokyo later on Sunday, the International Olympic Committee said, ending speculation about their participation after one team official had tested positive for COVID-19 in a training camp in Qatar.

The 26 of the total 29 refugee athletes that form the team had been in a training camp in Qatar and had to delay their departure for Tokyo earlier this week following the positive case.

“26 athletes, 16 coaches and 10 officials will be travelling to Japan in the next three days,” the IOC said.

“First group is due to arrive at Narita airport tonight after their departure for the Tokyo 2020 Games was delayed.”

The team, which will compete under the Olympic flag and includes people from countries including Syria, South Sudan, Eritrea, Afghanistan and Iran, is almost three times as big as the inaugural team at the Rio de Janeiro 2016 Olympics.

The athletes, who will march into the stadium during the opening ceremony in second place behind ancient Games founders Greece and will compete in 12 sports, were selected from a pool of 56.

The IOC unveiled its first refugee team at the Rio Games to raise awareness of the issue as hundreds of thousands of people were pouring into Europe from the Middle East and elsewhere escaping conflict and poverty.