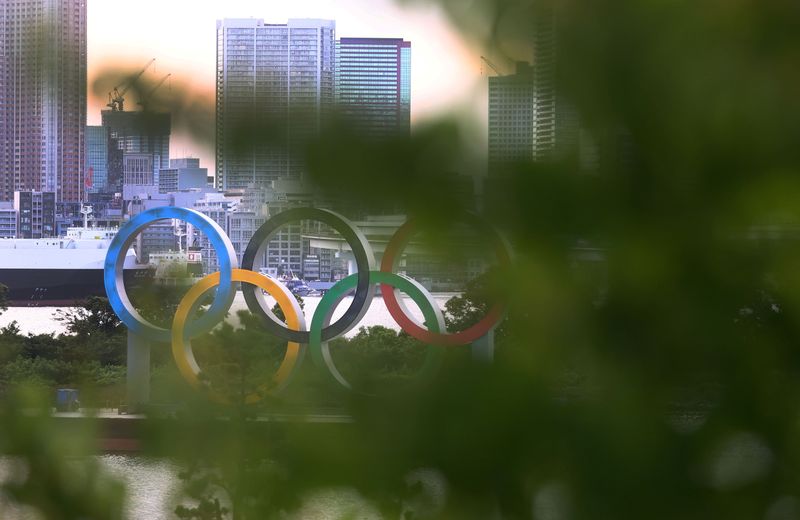 The Olympic Rings are seen in front of the skyline during sunset, three days ahead of the official opening of the Tokyo 2020 Olympic Games in Tokyo, Japan, July 20, 2021. REUTERS/Kai Pfaffenbach

(Reuters) – The Rodchenkov Anti-Doping Act (RADA) is essential to restoring integrity to international sports and protecting clean athletes but won’t be able to keep the Tokyo Games clean, a Helsinki Commission hearing in Washington was told on Wednesday.

The July 23-Aug. 8 Tokyo Olympics will be the first major test of this new law named after Grigory Rodchenkov, a former laboratory head who turned whistleblower and helped expose Russia’s state-sponsored doping.

The RADA bill empowers prosecutors to seek fines of up to $1 million and jail terms of up to 10 years.

“Sadly, RADA will not make the Tokyo games clean. They will not be clean, that much I guarantee,” Jim Walden, attorney for Rodchenkov, told the hearing.

“The first nine years of my career I spent battling organised crime families in New York as a federal prosecutor. As resilient as the Mob proved to be, it pales in comparison to the deeply entrenched corruption in international sports.”

According to Walden, RADA is essential to restore integrity to international sports and protect clean athletes because “the current system is corrupt, purposefully ineffective, and deeply conflicted”.

Walden said Congress could super-size RADA’s impact if it uses its oversight authority to ensure the FBI and Justice Department have a complete plan and allocate sufficient resources to bring cases.

He also said a second imperative would be to withhold funding for the World Anti-Doping Agency until more transparency and Executive Committee comprised primarily of former clean athletes and anti-doping scientists are achieved.

Edwin Moses, emeritus chair of the U.S. Anti-Doping Agency (USADA), told the hearing the “win at all costs” culture in sports is alive and well.

Moses said the state-sponsored doping of the Russians competing at the 2014 Sochi Olympics was shocking, but even worse was a “lack of repercussions” that he described as a nightmare realized and one that we have not yet woken from.

According to Moses, USADA is deeply committed to the effective utilization of RADA and will actively assist putting it in place and demonstrating its success.

“The Rodchenkov Act is a strong deterrent to those that look to corrupt sport, on a global scale and ultimately a powerful detection mechanism.”