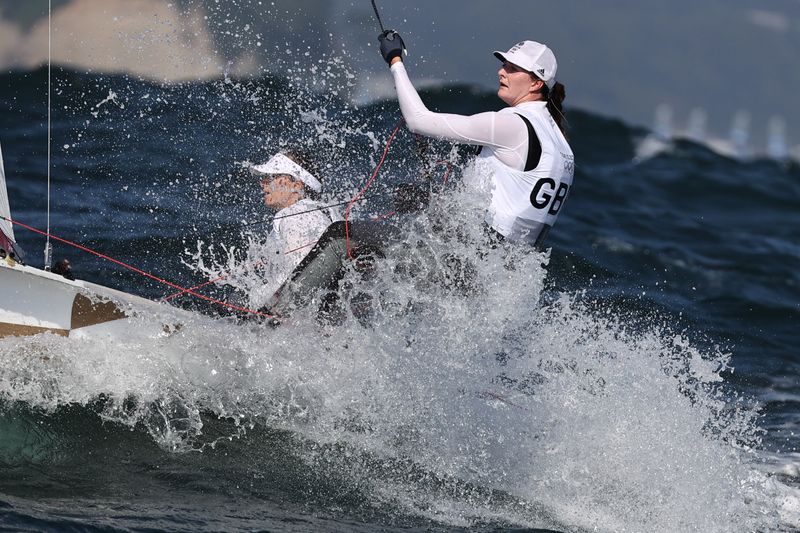 ENOSHIMA, Japan (Reuters) – Like the winds at the Enoshima Yacht Harbour, the sailing competitions at the Tokyo Games were a little slow to get going, but with the first medal races due to take place at the weekend the tempo is picking up, along with the wind and the waves.

The changeable conditions caused by an offshore typhoon this week have seen the opening days of the 11-day regatta experience everything from complete stillness to strong gusts and sweltering heat, often all on the same day.

The Enoshima Yacht Harbour, which also hosted sailing the 1964 Games, is a perfect Olympic venue, located on a small island connected to the mainland by a thin sliver of road that makes it easier for organisers to control the flow of traffic in and out.

On the Katase Higashama beach opposite the venue, the amateur windsurfers and sailors are still out on the water and the surf schools are in full flow, but the Olympic competition area is strictly off-limits to them.

Still, some spectators gather along the beaches, hoping to get a glimpse of the competitive action further out to sea.

On Wednesday, the flags of the competing nations were strung out in the strong wind, as reigning Olympic champion Hannah Mills and her team-mate Eilidh McIntyre entered the fray in the 470 dinghy class, finishing a respectable fourth.

The race saw the Swedish pairing of Olivia Bergstrom and Lovisa Karlsson capsize briefly in the heavy swell, but they will have plenty of opportunities to redeem themselves in the nine remaining races to decide who will contest the medals.

Earlier in the afternoon, the men’s and women’s RS:X windsurfers competed on their second-last day of qualifying ahead of Saturday’s medal races.

The choppy waves were not ideal for fast racing, but British competitor Emma Wilson, who is leading reigning Olympic champion Charline Picon of France after eight of the 12 qualifiers, said borrowing from another discipline helps her deal with them.

“I don’t even notice them that much. I try and find my inner surfer,” she said after one of the early rounds. “I’m not very good at surfing, but I just keep doing simple things well.”

Having won three of the nine races so far, three-time world champion Kiran Badloe of the Netherlands leads the men’s standings ahead of Italy’s Mattia Camboni and Thomas Goyard of France, with the last three qualifying races to be held on Thursday afternoon.