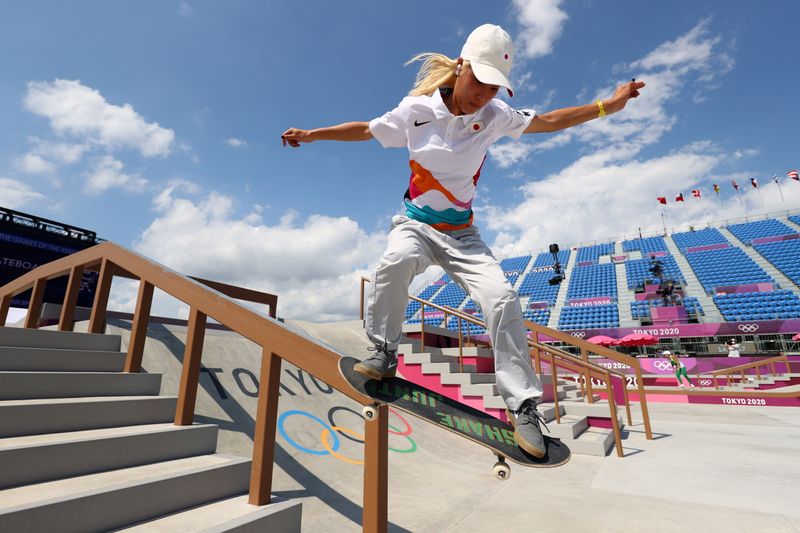 TOKYO (Reuters) – Skaters from Brazil and Japan are set to dominate the women’s street skateboarding event at the Olympics on Monday, with hopes that Tokyo’s own Aori Nishimura would bring home a second skateboarding gold for the host nation.

A trio of skaters, Pamela Rosa, 13-year-old Rayssa Leal and veteran Leticia Bufoni, are representing Brazil in the street competition, which takes place at a new skate park on Tokyo’s waterfront designed with ledges and purple rails.

Monday’s event will begin with 20 skaters competing in four heats of runs and tricks, with the highest scoring top eight athletes advancing to the finals.

Japan’s Yuto Horigome made history on Sunday by winning the first gold medal https://www.reuters.com/lifestyle/sports/skateboarding-horigome-wins-first-olympic-gold-skateboarding-2021-07-25 of skateboarding at the Olympics, landing a series of technical tricks while braving Tokyo’s relentless heat https://www.reuters.com/lifestyle/sports/skateboarding-skaters-battle-under-brutal-tokyo-heat-inaugural-games-2021-07-25, leaving U.S. hopeful Nyjah Huston, once thought to be a major contender for the top prize, in seventh place.

The 19-year old from Tokyo now lives in Los Angeles and has said she wants to inspire more Japanese kids to take up skateboarding and hopes the activity will become more accepted in broader society.

In an example of the sport’s sometimes uncomfortable position in Japanese society, white posters that read “SKATING BANNED” https://www.reuters.com/lifestyle/sports/skateboarding-skating-banned-sign-hangs-outside-venue-2021-07-25 were duct taped to a boundary fence on the edge of the Ariake Urban Park on Tokyo’s waterfront on Sunday, shielding locals from seeing the world’s top skateboarders.

The signs were posted by a nearby school in an area that has wide avenues and brick sidewalks.