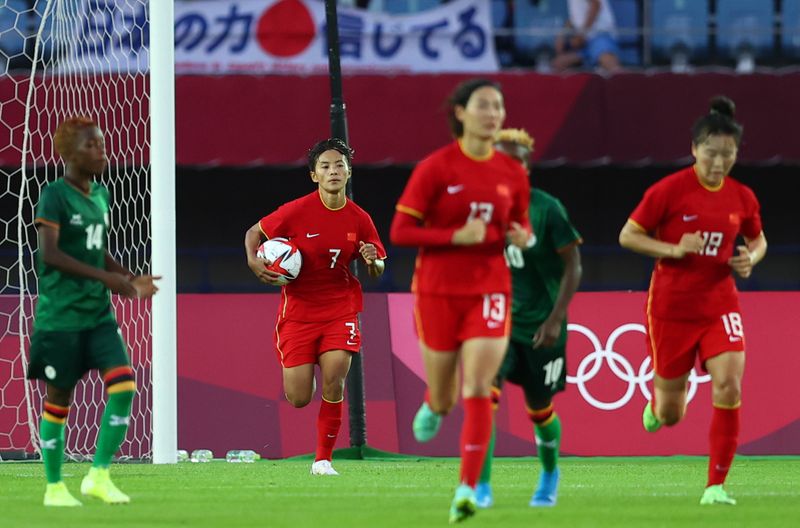 TOKYO (Reuters) – Sweden recovered to continue their dominant run in the women’s Olympic soccer tournament with a 4-2 comeback win over Australia, while Zambia striker Barbra Banda netted her second hat-trick in as many games to lead the scoring charts.

Three days after stunning world champions the United States, Sweden were on the front foot once again with a first-half Fridolina Rolfo strike before Australia captain Sam Kerr equalised just before halftime.

In a goal-laden second half, Kerr handed the Matildas a 2-1 lead, only for Sweden to score three quickfire goals courtesy of Lina Hurtig, Stina Blackstenius and Rolfo’s second.

There was still room for more drama at Saitama Stadium as Australia earned a late penalty but Kerr was denied a hat-trick as goalkeeper Hedvig Lindahl saved her spot kick and Sweden held on to claim all three points and top Group G.

After scoring a treble in Zambia’s 10-3 drubbing by the Netherlands, Banda cemented her status as the breakout player of the competition with another hat-trick in a 4-4 draw with China in Group F.

China had a goal machine of their own in Wang Shuang, who scored four times including a late penalty to earn her side a deserved point at Rifu’s Miyagi Stadium.

Wang became only the third player to score four goals in a match at the Games and the second in the tournament after Dutchwoman Vivianne Miedema.

In Group E, Manchester City forward Ellen White nodded in her third goal of the tournament to give England a 1-0 victory over hosts Japan, who stay winless after two games.

Earlier, Canada’s forward Janine Beckie scored in each half as they beat Chile 2-1 at the Sapporo Dome.

(Reporting by Shrivathsa Sridhar and Hardik Vyas in Bengaluru, editing by Pritha Sarkar and Ken Ferris)