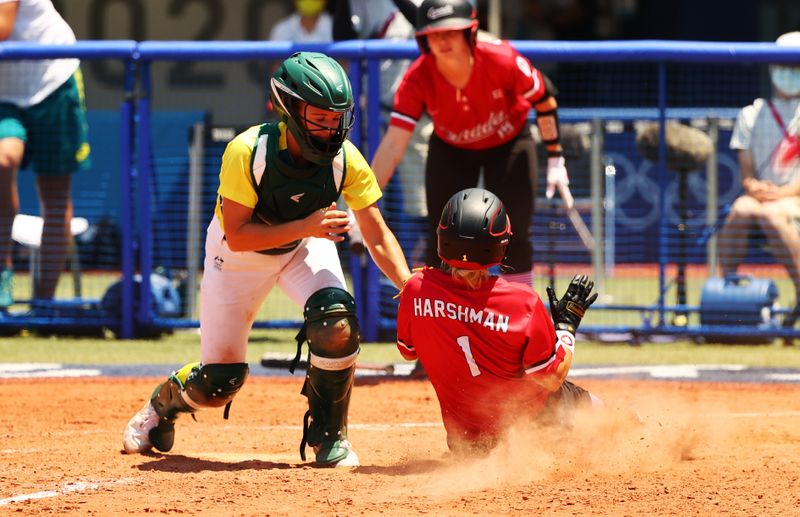 YOKOHAMA, Japan (Reuters) – Canada took advantage of a pair of throwing errors and piled on Australia to secure a 7-1 win on Saturday to start the third set of softball games at the Tokyo Olympics.

Australia’s second loss in the six-team tournament leaves them in fourth place with two games to go. The top four battle in medal games on Tuesday.

A stolen base and an Australian throwing error led to Canada’s first run. A sacrifice bunt and a double bounced over the fence brought in two more in the first inning against Australia pitcher Ellen Roberts. An inning later, another throwing error and another double over the same spot in centre field put Canada up 6-1.

Though Canadian starter Sara Groenewegen struggled, she with help from reliever Jenna Caira left six Australians stranded over the first two innings. Australia’s offensive failings left one of their coaches tossing his arms over his shaking head.

Saturday’s games were being held at a cleaned-up 43-year-old downtown stadium stripped of any sign that it houses Japanese baseball’s BayStars club. No one watched from roofs of squat offices and hotels beyond the outfield, nor balconies of a towering glass building further out. Hammering and welding from a new tower going up cut over chants from teams’ benches.

With barely two dozen people sitting in an ocean of 34,000 bright-to-dark blue seats because of COVID-19 restrictions, the only lines inside were players standing order for national anthems.

Clouds resting nearby failed to spare the field from harsh sun, forcing teams to cover their metal benches with towels.