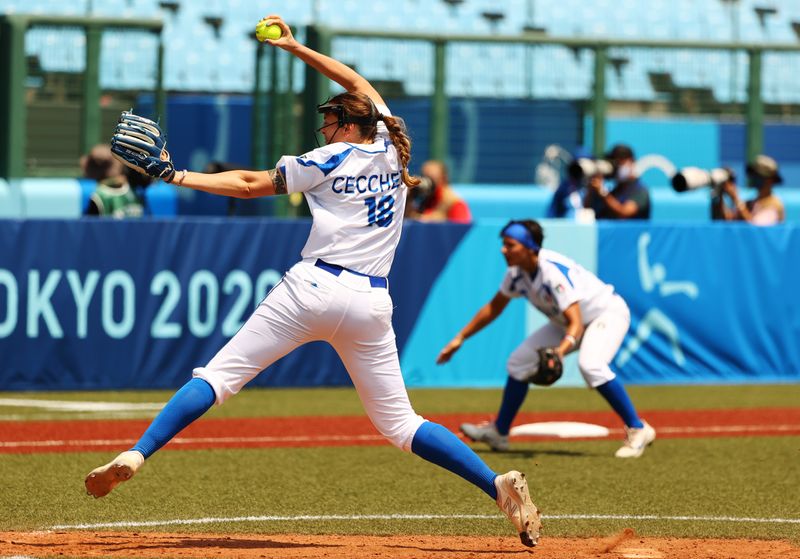 FUKUSHIMA, Japan (Reuters) – Italy’s softball team suffered a shutout loss in its Tokyo Games opener on Wednesday but aims to bounce back and honour late manager Enrico Obletter, who died in February at 61 of COVID-19 complications.

Obletter, the most successful coach in Italy’s domestic league, had joined the national team in 2017 and led its undefeated run in Olympics qualifiers against six European and African foes. Assistant and long-time friend Federico Pizzolini replaced him.

“There is a piece of us missing but we’re using that as fuel,” shortstop Amanda Fama told Reuters after Wednesday’s loss to the United States.

Pizzolini had a first try as coach three weeks ago when Italy swept a European championship. Players said they released most of their emotions at that tournament through gestures including moments of silence.

Italy, looking for their first Olympics medal after going 3-12 over two prior Games, mustered a lone hit on Wednesday against two of the world’s best pitchers.

The day before, Pizzolini, who players say engages in strategy more than his predecessor, was the only coach of the six Olympics softball teams who divulged his starting pitcher early instead of waiting moments before gametime.

“This game was a big statement,” she said. “It’s not easy to hold off a lineup like Team USA.”

Rebounding will not be easy. Italy is the lowest-ranked in the field and the least used to the artificial turf and wet heat of Japan. Cecchetti described the conditions as a backburner – at least for the first game.

“When you’re worrying about what you throw to a line-up like that,” she said, “it’s not the main thing you’re thinking about.”