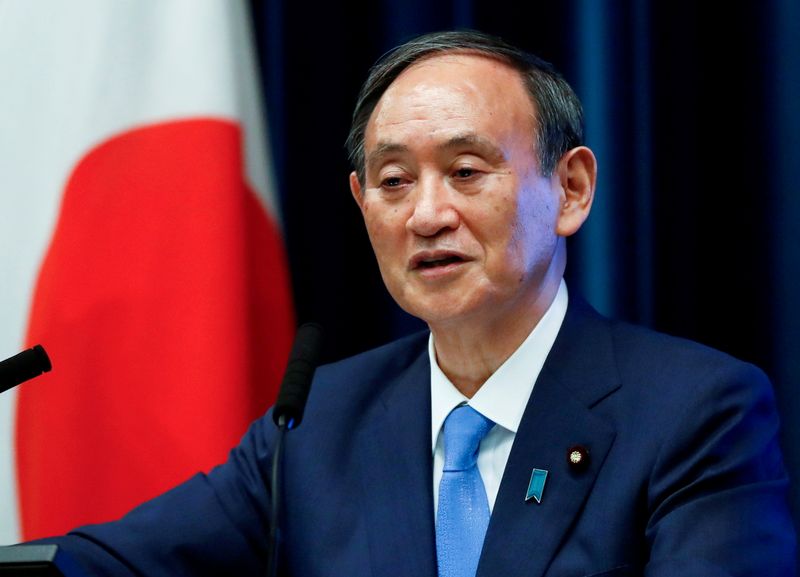 TOKYO (Reuters) -Support for Japanese Prime Minister Yoshihide Suga slid nine points to 34%, its lowest since he took office, a survey showed on Monday, as worries about COVID-19 clouded his hopes the Tokyo Olympics would boost his ratings ahead of an election this year.

Nearly two-thirds of respondents to the July 23-25 Nikkei business daily survey said the country’s rollout of coronavirus vaccinations was not going well.

The programme has been hampered by a slow start and supply snarls, and less than a quarter are fully vaccinated.

Suga’s dream scenario had been to contain the virus outbreak, preside over a successful Games and call a general election. That was upended after a surge in COVID-19 infections led to a fourth state of emergency in Tokyo and forced Olympic organisers to ban spectators from almost all venues.

Japan has had some cheering news from the Games, taking a total of five gold medals – including a historic two in judo by Uta Abe and her brother Hifumi on Sunday, as well as one silver medal.

Organisers were keeping a wary eye on tropical storm Nepartak, which was heading toward Japan’s east coast and likely to make landfall on Tuesday, although it was forecast to weaken.

The storm has already caused some scheduling changes. Tuesday’s rowing programme was disrupted, with races rescheduled for later in the week. Monday’s rowing events were moved to Sunday in anticipation of the storm.

Japan has not experienced an explosive COVID-19 outbreak as seen elsewhere but infections in host city Tokyo have been on the rise in recent weeks, with the capital recording 1,763 COVID-19 cases on Sunday.

Many Japanese fear the influx of athletes and officials for the global sporting event will add to the surge in infections, and 31% in the Nikkei survey said the Games, postponed last year because of the pandemic, should be cancelled or postponed again.

Fifty-six percent said Japan’s border steps for incoming Olympics athletes and officials were “inappropriate”, the Nikkei survey showed. The Games are being held under tight quarantine rules to prevent the spread of infections, but a number of cases have emerged involving athletes and others.

The Dutch rowing team’s performance director said the team had agreed to separate itself from other competitors after one of its athletes, a coach and a staff member all tested positive for COVID-19.

A strict “playbook” setting out rules to avoid contagion mandates frequent testing for the virus, restricted movements and wearing masks by athletes and others in most situations.

The International Olympic Committee said on Sunday, however, that athletes can briefly take off their masks on the podium for 30 seconds for a photo opportunity, as several did after their wins on the day.

Suga’s term as ruling Liberal Democratic Party (LDP) president expires in September and an election for parliament’s powerful lower house must be held by November.

Suga came in fifth in the Nikkei’s survey of preferred next prime ministers, with just 5% backing him.

Taro Kono, the minister in charge of the vaccine rollout, topped the list but his rating slipped four points to 19%, virtually tied with former defence minister Shigeru Ishiba. Next in line were Environment Minister Shinjiro Koizumi and Abe at 12% and 6% respectively.