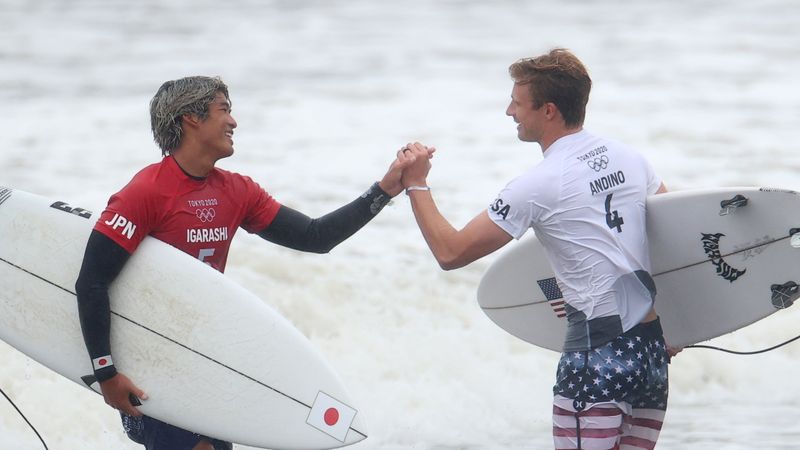 TOKYO (Reuters) – While other sports at the Games fear disruption from stormy conditions in Tokyo, surfers are embracing the wet and windy weather as the first Olympic medals in the sport’s history are set to be decided on Tuesday.

With the rain pouring down and the rolling waves reaching over head height at times, Japanese surfer Kanoa Igarashi hit a spectacular early barrel wave en route to a quarter-final victory over American Kolohe Andino.

“Today is one of those days when it’s man against ocean, more so than competing against your competitor, but that’s what makes it fun,” Igarashi told reporters.

There were plenty of big waves to choose from but the competitors had to be careful as each paddle back out in the heavy swell sapped energy that may be needed later in the day.

“In a free surf you wouldn’t want to waste that much energy getting back out, but for contesting on it’s definitely not ideal but it’s great that we have waves. It’s about who wants it more,” Igarashi explained.

Rather than avoid the bad weather, organisers moved the surfing semi-finals and finals forward a day to make the most of the big, bold waves, which are expected to abate as the weather changes on Wednesday.

The competition continues through the day, with the men and women alternating until the gold medal heats take place in the late afternoon.