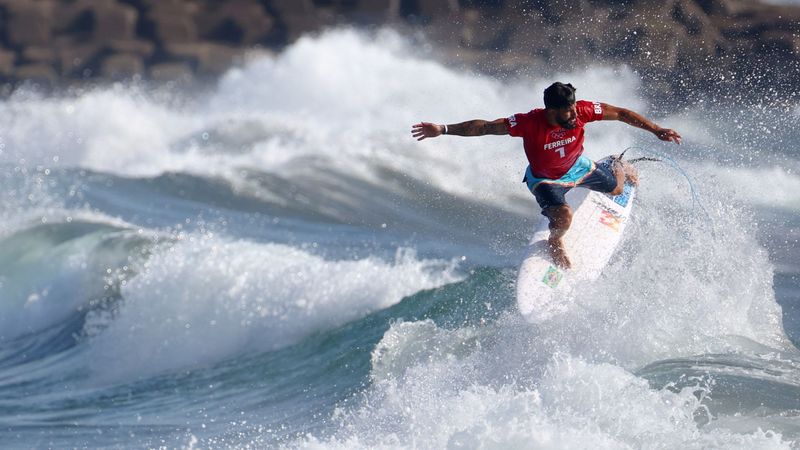 TOKYO (Reuters) – Four of the world’s top male surfers made history on Sunday morning as their sport made its long-awaited Olympic debut at the Tsurigasaki Surfing Beach, with Brazil’s Italo Ferreira emerging victorious from the first heat.

“I’m so stoked, it’s a special event and I’ve been training a lot these last couple of months, I’m so glad to be here,” he told reporters after edging out Hiroto Ohhara, Leonardo Fioravanti and Leandro Usuna to qualify directly for the third round.

Saturday’s lame waves for the final training session were quickly forgotten as Sunday morning’s swell offered the power the inaugural quartet was looking for to showcase the best side of their sport.

There was some discussion as to whether it was Ferreira or Argentina’s Usuna that caught the first Olympic wave, but as the heat wore on the Brazilian world number one showed his class.

“That was a terrible (first) wave!” Ferreira laughed. “I did two turns and on the last one I fell, (but) I tried to catch a lot of waves and put scores on the board.”

With the stronger waves perfectly suited to his air game Ferreira attacked aggressively, carving into each wave from right to left across the beach and launching into late spins that impressed the judges.

“Compared to the last couple of days, today was really fun – more waves, more opportunity, and I hope tomorrow we can have more waves and we can create something quite different,” Ferreira said.

With each competitor scored on their best two waves, Ferreira posted two late efforts that gave him a combined score of 13.67, ahead of local favourite Ohhara who came second on 11.40 to join the Brazilian in round three.

Italy’s Fioravanti (9.43) and Usuna (8.27) go into round two, where they will have another chance to make it through to the latter stages.

“That was insane man, that was fun. It’s the beginning, it’s just the start. The first heats are always crazy and an Olympic heat is really crazy,” Usuna told Reuters.

“Mixed emotions, you get anxiety, but it’s insane. I’m enjoying being here but I also want to do good for my country, so you’ve got to keep your head up and just keep going,” he added.

The competition continues, with five heats for men and five for women due to be completed on Sunday.