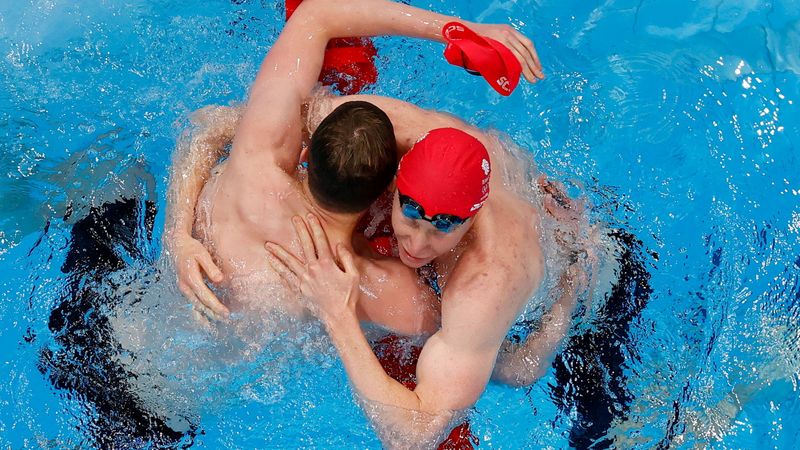 TOKYO (Reuters) – Tom Dean powered to the gold medal in the men’s 200m freestyle at the Tokyo Olympics on Tuesday, heading a British one-two with Duncan Scott taking silver.

Dean won in a time of 1:44.22 with Scott was just four hundredths of a second behind him.

South Korea’s Hwang Sun-woo was under the world record time at the 100m mark but faded badly, ending up seventh, as the British pair powered towards a spectacular finish.

The 21-year-old Dean’s gold was Britain’s second in the Tokyo pool after Adam Peaty’s success in the 100m breaststroke on Monday.

“I knew it was going to be a dogfight, I didn’t know how people were going to swim it, just race the race and that’s how it is,” said a delighted Dean.

Scott was narrowly above Dean in the rankings coming into the Games and qualified fastest, but was delighted for his team mate.

“Just a massive credit to Tom Dean. That was unbelievable. Olympic champion,” he said. “To come along so far in the last 18 months, it’s a pleasure to watch him. It’s great to be able to say he’s a good mate out of the pool.”

It is the first time since 1908 that two male British swimmers have finished on the Olympic podium together.