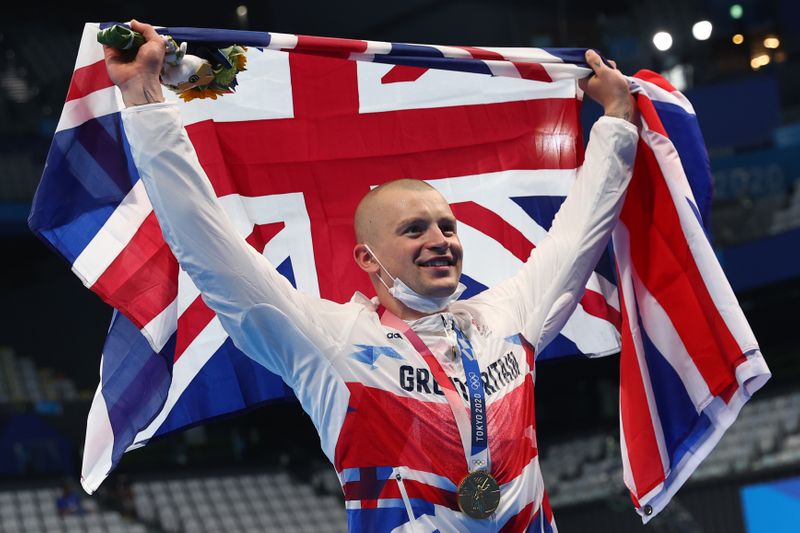 TOKYO (Reuters) – Adam Peaty roared with pride and relief as the fastest breaststroker in history became the first British swimmer to defend an Olympic title with a dominant 100m win in the Tokyo pool on Monday.

The gold was also his country’s first of the 2020 Games, just as he provided the first at Rio de Janeiro five years previously.

“I haven’t felt this good since 2016,” the 26-year-old world record holder told BBC television before putting the medal around his neck and posing for photographers with the British flag.

“It just means the world to me. I thought I had the best preparation of my life but then you throw in morning finals and you throw all that out the window.”

Peaty was Britain’s banker for gold, as much of a certainty as is possible in an Olympics overshadowed by the COVID-19 pandemic.

He walked out with a swagger, towel around his neck and arms raised with chest puffed out but underneath it all there were still the nerves of a man carrying a nation’s mighty expectations on his back.

Once he hit the water, however, there could never by any doubt. This was re-Peaty all over.

The Briton reached the turn 0.10 off his record and touched out in 57.37 with closest rival Arno Kamminga of the Netherlands taking silver in 58 seconds exactly.

“I did feel a little pressure into the final but it’s a good pressure. I needed to put myself on edge. I needed to go my fastest,” said Peaty, who has a tattoo of a lion on his shoulder.

Kamminga is the only other swimmer to have gone under 58 seconds in the event and Peaty had the fastest 16 swims of all time before Monday’s final but his record of 56.88 was not in danger.

“I’m not racing for a time, I’m racing myself … it’s not about a time its about a race,” said Peaty.

“This has closed a chapter for me. It was unfinished business.

“This victory wasn’t mine. It was the British swimming team, my family, my friends and those people I had to put to the sidelines for the moment because I knew it was going to take absolutely every single bit of energy to get to this point.”

(Reporting by Alan Baldwin in London, editing by Editing by Peter Rutherford)