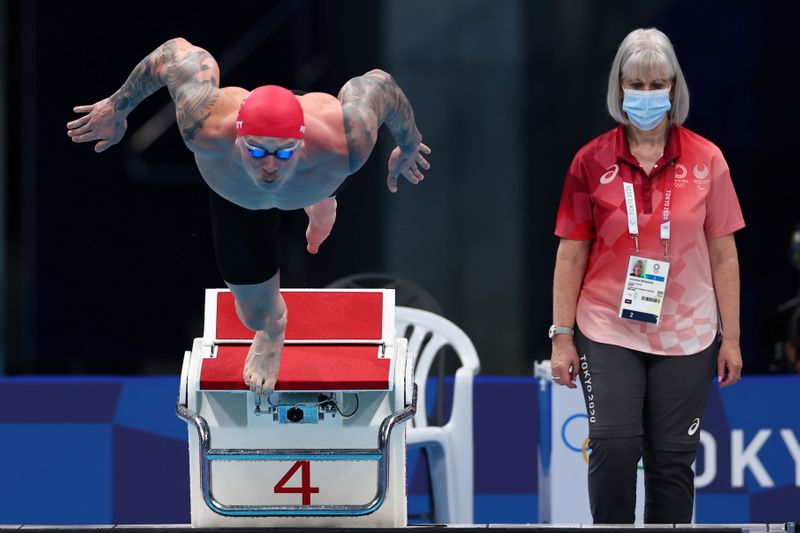 TOKYO (Reuters) – Adam Peaty said he was just shaking off the cobwebs, and felt weird without fans watching, but he still won his Olympic 100m breaststroke heat on Saturday with a time faster than any other man has ever swum.

The world and Olympic champion’s time of 57.56 seconds, while way off his world record 56.88, meant he now has the top 16 fastest swims of all time in the event — and he has yet to shave his moustache.

The only other man to have broken the 58 seconds barrier is Dutch rival Arno Kamminga, second fastest on Saturday with a career best 57.80.

It is a measure of Peaty’s dominance and status as an absolute gold medal certainty that it was almost alarming that he was not further ahead than the 0.24 that separated him from Kamminga.

There is however, no doubt that Britain’s best bet for gold has a lot more in the tank.

“Heats are heats. I always have cobwebs — it’s pretty much the exact same time I did in Rio — and I always build on that. We will just see where we go from here,” said Peaty, who is unbeaten over the distance since 2014.

“It is weird with no crowd. Really weird. But those are the psychological things we have to adapt to. I’m glad the cobwebs are out now.”

To put his performance into perspective, the world record before the Rio de Janeiro 2016 Games was 57.92 — a mark also held by Peaty at the time.

It would be no surprise if the Briton manages something truly phenomenal by the time the medals are handed out in Tokyo.

“It was a bit shaky off the start for some reason, I was gripping it a bit too hard,” said Peaty.

“There are a lot of variables when it comes to the Olympics, and it is about trying to control as many as you can. But some you can’t control.

Kamminga said he knew he was in good shape and was ready to go faster.

“It felt really strong and in control. Let’s see if I can chip away some more,” he said.

(Reporting by Alan Baldwin in London, editing by Pritha Sarkar)