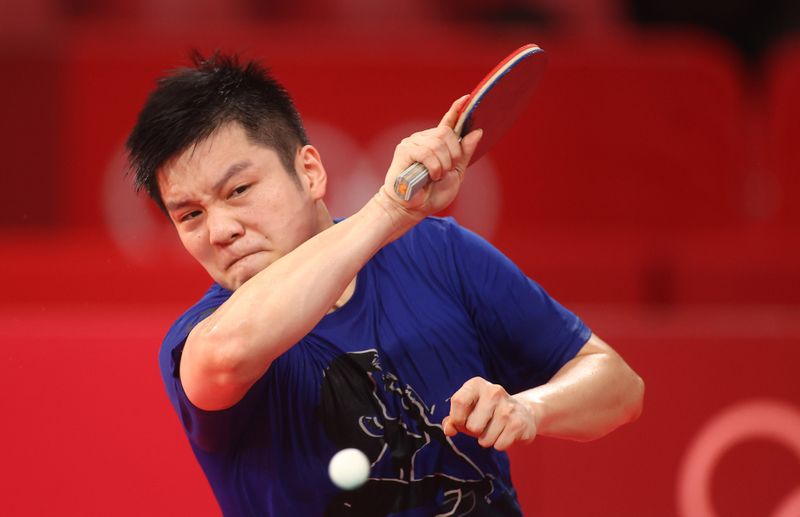 (Reuters) – Five table tennis players to watch out for at the Tokyo Olympics:

World number one and former Nanjing 2014 Youth Olympics champion Fan Zhendong will make his Olympics debut and lead the powerful Chinese men’s team, along with Ma Long and Xu Xin.

He joined the Chinese National Table Tennis Team as the youngest member of the team at the age of 15, and has since risen to become a key player in the sport. Known for explosive shakehand-grip play style and footwork, he is a four-time International Table Tennis Federation (ITTF) World Men’s Cup champion.

At 24, Fan is hoping to add the Olympics to his long list of achievements.

Another Olympic debutant is Tomokazu Harimoto, who is a favourite for a medal at the Games this summer.

Success in table tennis runs in Harimoto’s family – he is the son of two former Chinese table tennis professional players who moved to Japan before Harimoto was born, and his younger sister Miwa won three titles at the 2020 ITTF World Junior Circuit in the Czech Republic.

Zaza is set to be the youngest table tennis player to compete in the Olympics this year. Born in Hama, Syria, to an athletic family, the 12-year-old started playing table tennis at five.

She has been able to participate in only two or three external matches a year due to war, her coach Adham Jamaan has said. But Zaza beat the odds after winning the West Asia Olympic qualification tournament in Jordan last year, becoming the first Syrian paddler to qualify for the Olympics.

Ito is a central figure to Japan’s squad this summer, as she holds winning records against some Olympic-bound Chinese paddlers. Known for her fast attack and a constantly evolving playing style, the 20-year-old is second in women’s singles world ranking, the only non-Chinese athlete in the top five.

She played a pivotal role in securing bronze medal for the women’s team competition at the Rio Olympics five years ago, becoming the youngest-ever Olympic table tennis medallist.

Fans will also be looking for her mixed doubles match, where Ito and her compatriot Jun Mizutani hope to make history as the first-ever champion of mixed doubles.

Aruna became the first African to reach the Olympic quarter-finals after defeating former world number one German paddler Timo Boll at the Rio Games 2016. This year, the 32-year-old will be looking to get closer to the finals at his third Olympic appearance.

He is also known for his philanthropic work and contributions outside of the court, often donating table tennis equipment to Olympic and Paralympic hopefuls, and encouraging aspiring Nigerian athletes to pursue their dreams.