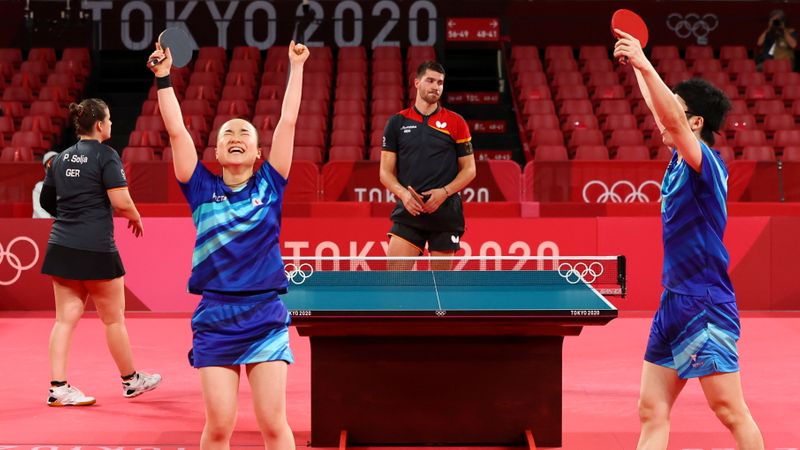 TOKYO (Reuters) – Japan’s Jun Mizutani and Mima Ito hugged each other and cried as they clung to victory against Germany on Sunday, while China’s powerful pairing of Xu Xin and Liu Shiwen said they will take a nap after winning the mixed doubles quarterfinals on Sunday.

Mizutani, 32, and 20-year-old Ito got off to a strong start in the first game with an 11-8 win, but German paddlers Patrick Franziska and Petrissa Solja fought back against the Japanese duo to tie the match at 3-3.

With a pat on the back from her partner in the last point of the deciding seventh game, Ito confidently secured victory for the pair with a serve that their opponent couldn’t return.

The Japanese pair, who are from the same hometown and have known each other since childhood, said they have been supportive of each other throughout the matches.

“Mizutani has been like a big brother to me since we were young, and someone whom I respect and admire. I’m really happy to be able to compete in the mixed doubles with him,” Ito told reporters.

“We want to compete more and more to show everyone what a true victory is like.”

World No.2 Xu and reigning world champion Liu cruised their way to a convincing triumph against their Romanian opponents Ovidiu Ionescu and Bernadette Szocs in a 4-0 clean sweep.

The Chinese duo will be pitted against French paddlers Emmanuel Lebesson and Yuan Jia Nan, who clinched their ticket to the semifinals in a heated battle against Wong Chun Ting and Doo Hoi Kem of Hong Kong.

“I’ll take a nap and analyse videos of our opponents’ plays to prepare for the match in the afternoon,” Xu said, with Liu saying she’ll do the same.

The mixed doubles made its Olympic debut this year at the Tokyo Metropolitan Gymnasium, with 16 pairs competing for the first Olympics gold in the best-of-seven matches.

Victors of the mixed doubles are set to return to the table once again for the semifinals later in the day.