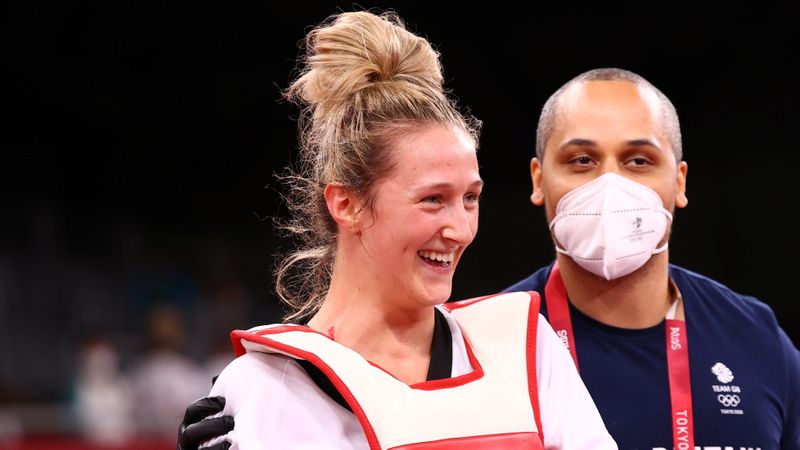 CHIBA, Japan (Reuters) -With less than 10 seconds left on the clock, Croatia’s Matea Jelic converted a three-point deficit into a lead to take the gold medal away from Briton Lauren Williams in an exciting Olympic taekwondo final in the women’s -67kg category on Monday.

Both light and hopping on their feet, Jelic and Williams were evenly matched through the three rounds, unceasing in their attempts at high-scoring head-kicks.

The score was level at 10-10 at the end of the second round but the action heated up in the final round, the lead see-sawing between the two. In the second half, Williams pulled ahead for a six-point surplus but, in the final seconds, Jelic nabbed kicks to the head and body to win 25-22.

Asked what went through her mind in the face of what looked like imminent defeat, Jelic said: “I just turned off my head. You just have to turn everything off and do what you need to do — trust your instincts and everything you did in training.

Williams, who collected Team Britain’s second silver medal in taekwondo after Bradly Sinden’s on Sunday, said she was “gutted” by the result but took it in her stride.

“To be 22 and stood on the Olympic podium is incredible,” she said. “This is what I’ve worked all my life for — obviously it’s the wrong colour but I’m really enjoying myself.”

Welsh-born Williams switched from kick-boxing to taekwondo, inspired by featherweight Jade Jones’s gold-medal win at the London Games in 2012. Jones went out after one match on Sunday, ending her dream to win a record third gold medal in taekwondo.

Egypt took two bronzes in the welterweight category: Seif Eissa in the men’s contest and Hedaya Wahba in the women’s – her second after winning in the lighter -57kg category in Rio de Janeiro in 2016.