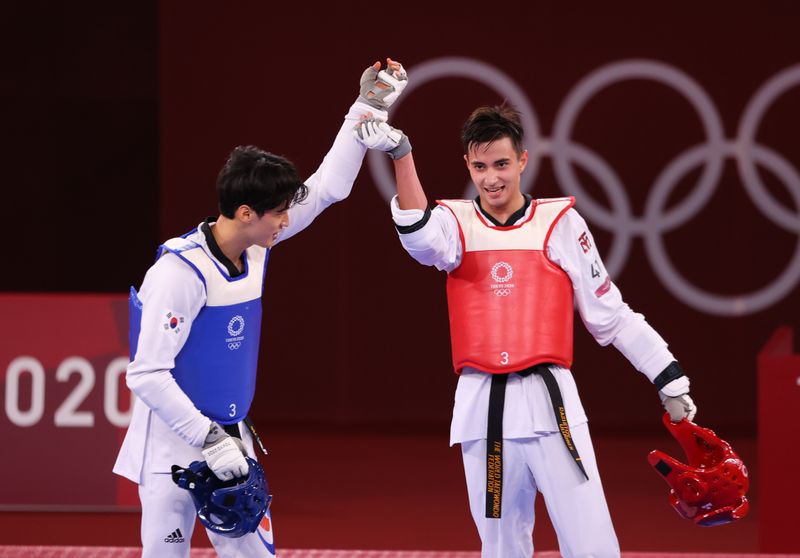 CHIBA, Japan (Reuters) -Top-ranked taekwondo athlete Lee Dae-hoon lost in the first match of his final Olympics on Sunday, dashing South Korea’s best hope for a gold medal in the national sport it once dominated.

Lee has won a trove of gold medals including three world championships and a record 12 Grands Prix, but the Olympic trophy has eluded him. He won silver in London 2012 and bronze in Rio four years later.

“It’s my last Olympics so I wish I could have done better,” he said. “I was well in my body and mind but my management of the fight could have been better; I was successful at the beginning but then I felt rushed.”

A 29-year-old father of a toddler, Lee said nerves also got in the way on the Olympic stage. South Korea has won a record 12 Olympic gold medals in taekwondo but no longer dominates the sport, which has athletes from 61 countries and territories, plus the Refugee Olympic Team, represented in Tokyo.

“Since the Olympic Games are really big, maybe I felt more pressure.”

Popular in the taekwondo circuit – he has won the peer-voted “Player of the Year” award more times than any other athlete – Lee said he was satisfied as an athlete, even as he wished for a different result as he prepares to retire.

His first-match loss on Sunday, to Uzbek Ulugbek Rashitov, ranked 17th in the world, added another upset to a tournament loaded with surprises since it kicked off on Saturday.

Tied at the end of the three two-minutes rounds, Lee conceded a body kick to Rashitov in the “golden round”, where the first to score automatically wins. As an ecstatic Rashitov jumped up and down pumping his fists, Lee crouched onto his hands and knees, head on the mat. Rashitov went on to win the gold medal.

Lee returned in the repechage stage for a chance at the bronze but lost to China’s Zhao Shuai.